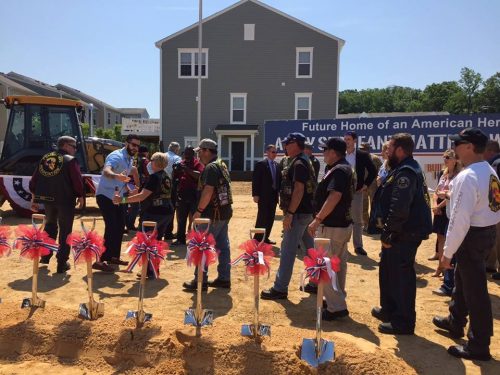 It was a great day for Army Sgt. Matthew White when he learned that he would be receiving a new home at Cherry Hill Crossing in Dumfries.

The house was donated to White as part of PulteGroup’s Built to Honor Program, which has so far provided 30 mortgage-free homes for wounded veterans and their families since 2013, according to a release.

White enlisted in the Army in 2007 and served in the 82nd Airborne Division, stated a release. During White’s second deployment to Afghanistan for Operation Enduring Freedom, he was injured by an I.E.D while on foot patrol, which led to the eventual amputation of his right leg from the knee down, according to a release.

Following his injury, White has worked hard with the Senate Committee on Veteran’s Affairs and the Board of Veteran’s Appeal in the FOIA office to help other veterans and their families, and has stayed active, participating in several sporting events, stated a release.

According to a release, Centex Homes – the builder for this project – and several local contractors and vendors donated the land, labor, and materials to build White’s new 1,529 square foot town home. Centex is working with White to customize the home for his needs, stated a release.

White had initially applied for the home through an organization called Operation FINALLY HOME, which is a non-profit that provides mortgage-free custom homes for wounded, ill, and injured veterans and their families, as well as widows, stated a release.