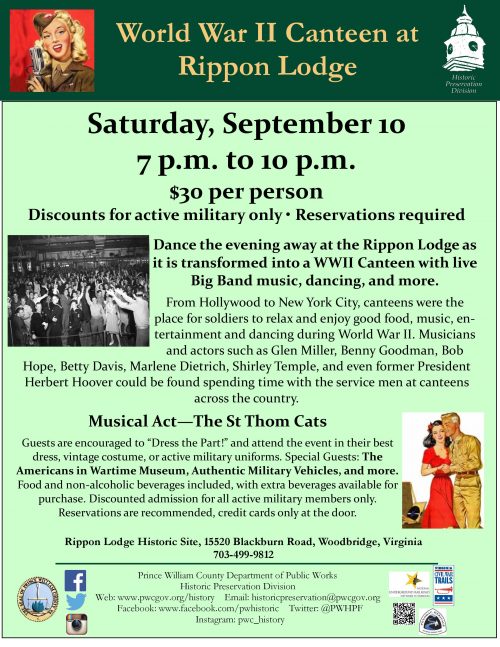 Get ready for a blast from the past at the World War II Canteen event on September 10.

According to a release, the event will be held from 7 p.m. to 10 p.m. at the Rippon Lodge at 15520 Blackburn Road in Woodbridge.

The Canteen is being hosted to commemorate the 75th anniversary of Pearl Harbor, and is the second in a three-event series to recognize the sacrifices made in World War II, according to a release.

“During World War II, canteens were more than just used for transporting water. The term was used for various buildings across the United States and in the European Theatre that served as entertainment locals for service men (and women) to go and listen to great music, get home cooked food, non-alcoholic beverages, and perhaps rub shoulders with famous motion picture and theater stars, musicians and even former presidents,” stated a release.

During the event food and non-alcoholic beverages will be provided. There will be live music from the Saint Thom Cats, and the Americans During Wartime Museum will showcase military vehicles and uniforms.

Participants are asked to dress in their military uniform or a 1940s outfit, according to a release. Tickets are $30, and there is a discount for active military members.