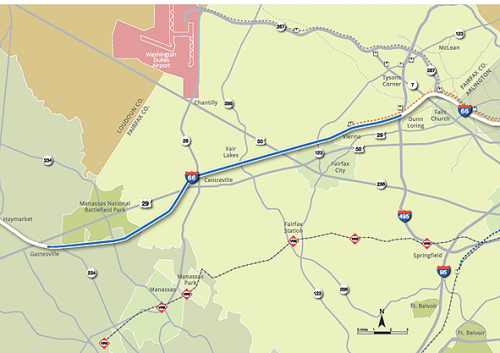 The ‘Transform 66 Outside the Beltway’ express lanes project is schedule to start in the area this year.

According to Virginia Department of Transportation (VDOT) documents, the project will be taking place along a 22.5 mile stretch of I-66 outside of the Beltway, from I-495 down to Haymarket.

The project will include the construction of two express lanes that will be built alongside the existing three regular lanes in each direction, stated VDOT documents.

Additionally, there will be “expanded transit service and park-and-ride lots…[and] interchange improvements to enhance safety and reduce congestion, including auxiliary lanes between interchanges,” according to VDOT’s site for the project.

The project is similar to the I-95 and I-495 Express Lanes, where vehicles with three or more people will be able to travel as HOV on the lanes for free, while other drivers in the lanes will pay a variable toll, calculated based on traffic conditions, stated VDOT documents.

The project is being handled by Express Mobility Partners, a choice which Virginia expects will save them $2.5 billion on the project.

The express lanes are scheduled to be completed by mid-2022.