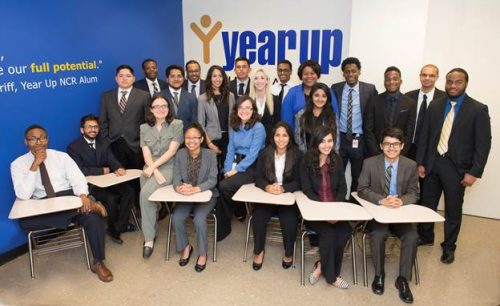 According to a release, Year Up is a non-profit that helps low-income young adults get hands-on training, college credits, and internships in IT and cybersecurity.

“For the first six months of the program, students develop technical and professional skills in the classroom. During the second six months, students are then able to apply their professional and technical skills on an internship with one of Year Up’s corporate partners,” stated a release.

This cohort was the launch of the one-year program in Woodbridge, and began in August 2015, according to a release.

Year Up Woodbridge Site Director Mariama Boney stated that the program was a great opportunity to help students and create a more diverse workforce.

“The students who accepted the opportunity and challenge of Year Up as the first cohort are an inspiration and demonstrate the grit needed to reach their goals of a career in one year. For each student to take an 18-credit course load during the fall semester with six months of professional training; then take six credits each spring and summer term plus a 40-hour per week internship; manage family responsibilities and participate in campus organizations is a significant accomplishment. They have emerged as empowered, professional, in-demand and career ready young adults,” stated Boney in a release.

According to a release, 15 of the students have already received job offers, six are currently going through job interviews, and four students are planning to transfer to a university to complete their Bachelor’s degree.

The following are the 25 graduates of the program, from a release: