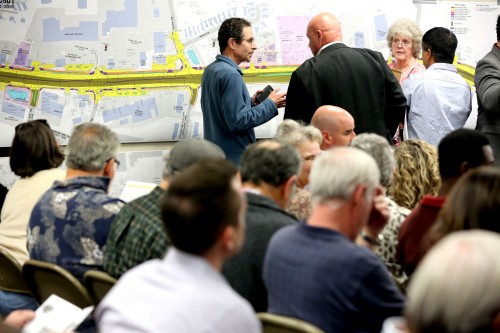 Woodbridge residents get an update on Route 1 widening project

Prince William residents made their voices heard at a citizen’s information meeting on March 23, for the Route 1 (U.S. 1) widening project.

According to a Prince William County Government release, the room was filled, as residents spoke about the project. The current phase of the project being discussed will take place on the 1.3 mile stretch between Featherstone Road and Mary’s Way.

Currently, the Woodbridge section of Route 1 sees 40,000 car trips per day, according to county staff reports.

One of the concerns raised during the meeting was the cost of the project.

The current phase, which includes the section between Featherstone Road and Mary’s Way, will cost $250 million, stated Supervisor Frank Principi in a release.

The project is being funded with a combination of federal, state, and local funds, stated Prince William County’s Department of Transportation Director Tom Blaser in a release.

Another concern raised by several residents was the impact that the construction would have on the community.

“It’s going to have impacts on all of us, whether or not you’re a property owner, a business owner, a resident or you’re a commuter,” stated Principi in a release.

The meeting was a chance for members of the community to learn about the project, as well as give Blaser and the county’s Department of Transportation feedback on the project, to help them move forward with the design and implementation, according to a release.

According to a release, residents still have a chance to comment. Individuals that would like to comment about the Route 1 widening project can email Sherry Djouharian at sdjouharian@pwcgov.org, or mail her comments at Prince William County Department of Transportation, 5 County Complex Court, Suite 290, Prince William, Va., 22192, stated a release.

Residents also have the option to reach out to Principi’s office at 703-792-7803 or email at jkupiec@pwcgov.org.

This phase of the Route 1 widening project is expected to be completed by 2021, according to a release.