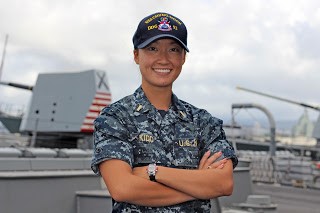 According to a release, Kidd was a C.D. Hylton High School graduate, and is currently serving as the gunnery officer on the USS Chung-Hoon in Pearl Harbor, Hawaii.

“A Navy gunnery officer is responsible for most of the weapons systems aboard the ship and ensuring that they are operational and the sailors are qualified,” stated a release.

According to a release, RIMPAC is a training opportunity that began in 1971, which helps maritime branches from several nations work together to ensure the safety and security of the world’s oceans.

This year’s RIMPAC exercise included 26 countries, 45 surface ships, 5 submarines, more than 200 aircraft, and 25,000 service members and personnel, according to a release.

The countries that participated, from a release:

The experience was challenging for Kidd, but an important one for her leadership skills.

“I think I’ve definitely learned how to handle stress differently since joining the Navy. I knew what was going to happen coming out of the academy but I’ve definitely pushed myself and my limits. I’ve also developed my capability to take care of people as a leader,” stated Kidd in a release.

The RIMPAC exercise concluded on August 4.