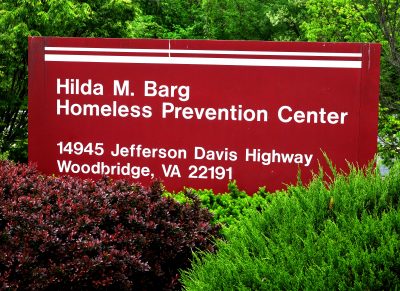 It’s been 25 years since the Hilda Barg Homeless Prevention Center opened its doors in Woodbridge.

“The center gives temporary housing and aid to people who find themselves in unfortunate, and sometimes unpreventable, circumstances. It provides a place for people to get off the street and into a stable environment while they work out their problems,” stated a release.

Prior to the building of the shelter, in the 70s and 80s, Prince William residents began to notice that the homeless population in the area was growing, and there was no funding allotted by the county for the homeless or homeless prevention programs, stated former Prince William County Department of Social Services Rick Perez in a release.

To combat the issue area churches formed the Cooperative Council of Ministries (CCoM) and opened their doors on a weekly basis to the homeless, but that soon stretched the churches beyond their limits, according to a release. At one point, the county’s Social Services Department even began housing the homeless temporarily in local hotels, which became costly, according to a release.

“We had no experience. We had no prior programs, so it was all done on the fly. We had to learn as the problem grew,” Perez stated in a release.

After continued struggles, the county realized that there was a need to find other solutions to house the homeless. Then county Supervisor Hilda Barg went in search of the right place to establish a homeless shelter, according to a release.

“We’d ride up and down Route 1 looking for property where we might be able to site a building, and at the same time, trying to persuade the Board of Supervisors that it was important that we have funding for this,” stated Perez in a release.

Working together, Barg and Perez were able to find a dilapidated hotel and worked with the owners to turn the location into a shelter.

“They enlisted the help of the Northern Virginia Builders Association whose members volunteered time and donated fixtures and building materials to renovate the old hotel that once stood near the present shelter on U.S. 1 in Woodbridge. The CCOM continued to provide evening meals,” stated a release.

And while this worked for a time, because of the maintenance and space issues, the board of supervisors decided to invest $1.8 million into building a homeless shelter on county land. This became what is known as the Hilda Barg Homeless Prevention Center.

“When construction started on the building, Barg worked with the Northern Virginia Builders Association, who once again contributed to the project. Neighbors brought in items to decorate the shelter, she said. The CCOM continued to provide meals, but the shelter then had a kitchen in which to prepare them. The CCOM is still providing lunch and dinner to the homeless to this day,” stated a release.

Director of the Department of Social Services Courtney Tierney said that the continued operation of the shelter after all of these years would not have been possible without the support of the community, according to a release.

“The work that Hilda Barg did and her ability to keep with this program – she is another backbone and that is a wonderful thing,” stated Tierney in a release.

According to Tierney, the shelter offers more than a place to stay for the community’s homeless.

“Help includes counselling for employment with connections with area employers and case managers to help the homeless get jobs. The shelter also has relationships to clinics in the community to help with health issues faced by the homeless. The Virginia Cooperative Extension offers classes in budget management to shelter residents,” stated a release.

Barg looked back fondly on the teamwork that it took to make the shelter a reality.

“It is amazing what a community can do when there’s a need. It took a whole team to put it together to build this beautiful building. This shelter to me is a true example of a … real partnership, all of the churches, all of the folks working together, to provide a home for folks in a time of crisis,” stated Barg in a release.