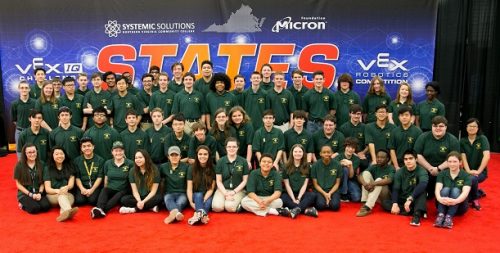 The Woodbridge Senior High School (WSHS) Robotics Team has now qualified for the World Tournament for the sixth year in a row.

On February 17 and 18, the team participated in the Virginia VEX Robotics State Championships. This year WSHS sent eight of their nine teams to this state tournament, and 48 teams from all over Virginia competed.

In order to get to the state level competition, the WSHS robotics teams had to compete in five regional competitions.

More on how the WSHS teams fared at state competition:

Four of Woodbridge Senior High Schools eight robots got through the round robin qualifiers and continued to compete in the playoffs for the title.

Team 1575X and Team B Captained by Michael Griese and team members Ryan Crow, Savannah Brown, Sean Zylich, Arran Scaife, Katyana Russell, and Mesgana Dinare earned a spot to the world tournament for having the Robotics Skills highest point total overall in the state for the season for teams that didn’t qualify for worlds in another way.

The winning teams will be taking three robots to compete in the VEX World Robotics Championships in Kentucky this year, April 19 to the 22. They will be competing with more than 540 teams from around the world.