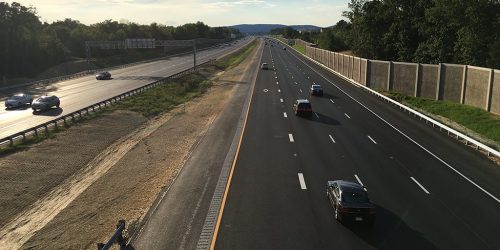 $64.5M I-66 widening project in Prince William is now complete

The $64.5 million construction project to widen a portion of I-66 is now complete.

According to the Virginia Department of Transportation (VDOT), drivers have a four mile stretch of additional capacity, as well as an extension for the HOV lanes between Route 15 in Haymarket and Route 29 in Gainesville.

The section was widened from four to eight lanes, according to VDOT. The project also included an additional left-turn lane for the westbound ramp to Route 15, new components for the active traffic management system, new bridges for Old Carolina and Catharpin roads – which included shared-use paths, as well as new drainage structures, retaining walls, sound barriers, and landscaping, according to VDOT.

“We are proud of the hard work that VDOT staff and contractor crews performed to double the capacity of this segment of highway. On I-66, drivers now have three regular lanes and one HOV lane in each direction for 25 miles, from I-495 to Route 15. We appreciate the ongoing support of the community as we completed this work,” stated District Construction Engineer Bill Cuttler in a release.

A separate $59 million VDOT project for the interchange at I-66 and Route 15 Haymarket is still ongoing, and should be completed fall 2017, according to VDOT.