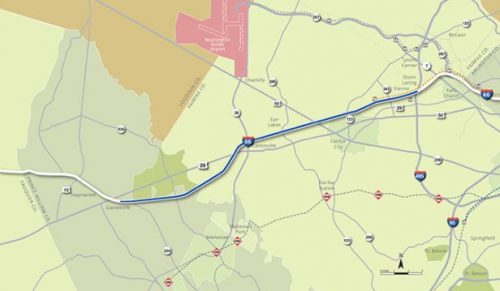 A couple of widening projects could impact drivers who travel through the western side of Prince William County.

Work will soon begin on the Virginia Department of Transportation’s (VDOT) Transform 66 Outside the Beltway project, according to a county release.

The 22.5 mile-long project runs from the Capital Beltway to Route 29 in Gainesville. It seeks to provide traveling alternatives for Northern Virginia residents.

Two express lanes and three lanes that can be used for general use will be added in both directions on I-66.

FAM Construction, LLC will perform the work, which is expected to be completed by December 2022. Construction will be done at night and during “off-peak” hours, according to FAM Spokesperson Nancy Smith.

Those driving on I-66 will soon see more road work equipment.

“In the next couple of weeks, depending on the weather, we’ll be taking out the rumble strips along I-66; and then in the late May, early June time frame, we’ll do a long-term lane shift on the main line, both east and westbound between US Highway 29 in Gainesville to about where the rest area is,” Smith said. “By next summer, the entire corridor will be transitioned to a construction zone.”

I-66 isn’t the only major road that is being expanded.

Balls Ford Road will be relocated and a new bridge will be built over the Norfolk Southern Railroad, as part of a new interchange that will be located at the Route 234 Bypass.

In the deal to construct and operate express lanes I-66 Express Mobility Partners has given VDOT $500 million. Of the funds received, $209 million will go to the Balls Ford Road projects.

At its meetings on Tuesday, the Board of County Supervisors (BOCS) set aside funds for the road work.

The designing for the projects will begin in May and construction is slated for 2020.

Two commuter parking lots will also be constructed as part of the Transform 66 Outside the Beltway project.

A lot that will offer about 1,200 parking spots will be built at the intersection of I-66, Route 29 and University Boulevard. It is slated for completion by summer 2019.

The lot will offer security cameras, covered bicycle racks and information on parking availability. It is expected to have more than 1,500 parking spots by 2040.

To learn more information about the Transform 66 Outside the Beltway project, visit www.transform66.org.