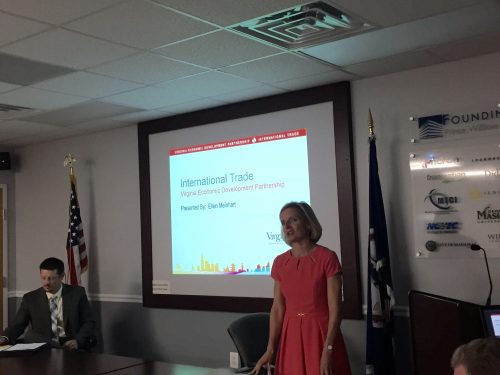 95% of world’s consumers outside U.S., providing opportunity for Virginia businesses to export

According to Meinhart, over the next 5 years the global middle class is going to grow by 200 million – and they’re going to need products and services.

Meinhart highlighted the benefits of exporting as a Virginia company, stating that companies that export internationally see a 17% higher profit margin, a large demand for their products, and a 15% higher wage for their employees.

Despite these benefits, several companies are still hesitant to begin doing business internationally.

“With all of this opportunity to sell internationally, why don’t more companies…sell internationally? There’s a lot of reasons for that. A lot of companies think it’s too risky – Canada is okay, they speak English, their legal system is similar for the most part…but selling somewhere else can seem a little bit scary. But when you look at this from a business perspective, [with] any country you can determine what risks are in any of those countries, and how to mitigate that,” said Meinhart.

“A lot of companies when they’re first starting out, really don’t know what markets to sell to – [we] do a top markets report. We have contracts…in 75 countries with companies that do primary research on behalf of Virginia companies,” said Meinhart.

According to Meinhart, VDEP coordinates trade missions throughout the year, and they handle the logistics, trade meetings, and accommodations for interested businesses. They also have their Virginia Leaders in Export Trade program, which is a 2-year accelerator program, which provides funding and support as companies begin exporting internationally.

For Meinhart, part of the motivation for pushing companies to sell internationally is to diversify Virginia’s economy and revenues.

“The state of Virginia is extremely dependent on the federal government, and federal government spending is going down. So the state is looking for other revenue streams to keep those companies here, keep the people here, and keep Virginia a…strong place for businesses,” said Meinhart.