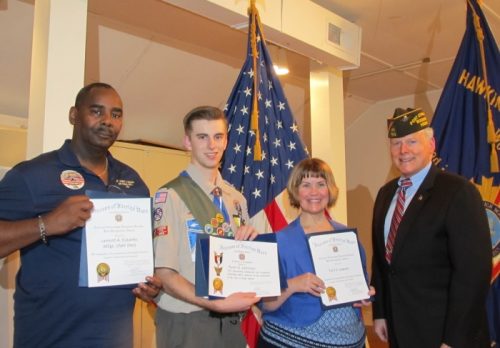 “The VFW Teacher of the Year award contest recognizes exceptional teachers for their outstanding commitment to teaching Americanism and Patriotism to their students,” stated a release.

The winner of Teacher of the Year for the middle school level was Terri Lawson.

More on Lawson, from a release:

Lawson is a Saunders Middle School Physical Science teacher. Ms. Lawson was nominated for her innovative teaching skills, sharing teaching strategies, activities and lessons with other teachers, and sharing her knowledge to benefit students in several grades.

The winner of Teacher of the Year for the high school level was Lamont Eubanks.

More on Eubanks, from a release:

Eubanks is a Air Force Junior ROTC Instructor at C.B. Hylton High School. He instructs students, in grades 9-12 who are going the Air Force JROTC program. He is a champion of Americanism, encouraging students/cadets to become better citizens by showing the students how to serving our local community, and by encouraging them to think beyond themselves. We have seen MSGT Eubanks and his cadets perform at several VFW ceremonies including the POW/MIA ceremony each September.

“The Veterans of Foreign Wars established the Scout of the Year scholarship program to provide members of the Boy Scouts and Girl Scouts who display standout citizenship, patriotism and love of country with the opportunity to be rewarded with college scholarships,” stated a release.

More on Johnson, from a release:

Ryan Johnson was chosen based on an outstanding resume of high school activities, scouting record, community service record along with many letters of recommendation. Ryan G. Johnson, will represent also us at the VFW District, State and National competitions.