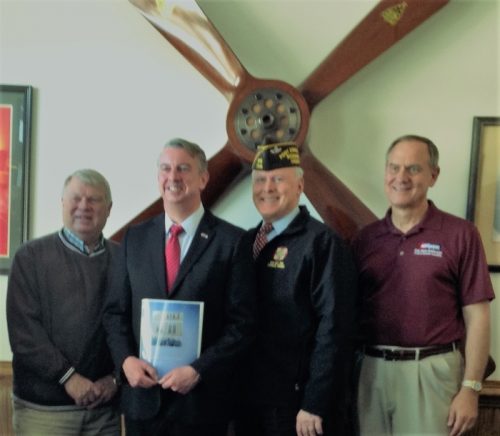 Over the weekend, VFW Post 7916 Commander Chuck Wilson held a roundtable on veterans issues in Occoquan.

There were more than 50 veterans, active duty, retired, and honorably discharged servicemen at the roundtable to discuss issues facing veterans in Virginia.

“There are over 800,000 veterans in Virginia and 120,000 active duty in Virginia. Virginia is #4 in the United States in terms of veteran population,” stated a release.

Several elected officials and candidates including gubernatorial candidate Ed Gillespie, Delegate Scott Lingamfelter, and Delegate Rich Anderson participated in the discussion, and spoke about their experiences as a veterans or on veterans issues.

There were a wide range of issues that concerned the veterans. Illegal immigration, numerous reports of thousands of illegal votes in Virginia, the Virginia taxation that causes transitioning veterans to move to a more tax friendly state, the hardships of disabled veterans in Virginia, all having a impact on Virginia’s veteran population.

Gillespie informed the audience of the many benefits the Virginia veterans do have including the building on a new Veterans Care Center not far from Manassas. Both Delegates Anderson and Lingamfelter supported the dialog with many examples of legislation that they have put forth for Virginia veterans.

Winding up the “Veterans Roundtable,” Post Commander Wilson presented Gubernatorial candidate Gillespie with a hard copy of the Post 7916 yearbook that shows, pictorially, the many accomplishments of the Occoquan VFW Post.