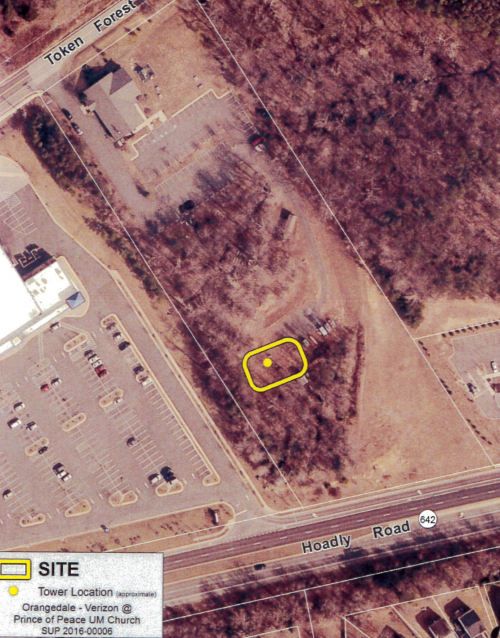 A special use permit request from Verizon to build a 144-foot telecommunications ‘monopole’ at the Manassas-Woodbridge line was rejected by the Prince William Board of County Supervisors.

According to county documents, the monopole was to be built within a fenced compound on a piece of property owned by the Prince of Peace United Methodist Church at the intersection of Token Forest Drive and Purcell Road.

A representative from Verizon said that the company had approached the church, who had expressed an interest in leasing the 5-acre parcel to the company to construct the monopole.

“What we really have to try to do is fill a grid – fill in a part of the network,” said the representative from Verizon at the meeting last week.

According to the Verizon representative, the reason the company was interested in placing the monopole there was that it was the most suitable, available site, and that the pole needed to be constructed to improve cell phone service in the area.

The request was deferred for several months by Verizon, in order for the company to have a chance to convince area residents that the monopole would be a community asset, according to county documents. But unfortunately for Verizon, it did not appear that the effort proved successful, as several community members attended the public hearing for the project to express their opposition.

“Before you make this decision, I want you to consider how technology has changed our landscape over the last 15 years…when we evolve to 5G, the cell towers are going to have to change. Speeds will be 1,000 times faster – that’s great – and coverage will be four times what it is right now. So before you make a decision, whether to approve this or not, Prince of Peace United Methodist Church will be signing a 25 year contract on this monopole,” said resident Tim Singstock.

Some residents stated that they paid more for their property because of the lack of structures like the monopole nearby, and that Verizon’s monopole would infringe upon the natural beauty in the area.

“Each of us paid an additional premium for the lot on which our houses were built…to the developer, for the right to live there. These homes back trees, not to other homes. We paid for the right to have nothing behind our home, but trees. Owners of these properties made a conscious decision to buy when the communications tower was not looming in the area, and did not present itself as an eyesore. The homeowners should now have a choice to allow, or not allow, an unsightly tower that will disrupt the peace and tranquility that the conservation area offers,” said resident Larry Bringleman.

Another speaker stated that an informal survey of 103 residents was done, and the survey’s findings showed that 88% of people would not purchase a home next to a monopole, and a majority of individuals said that they expected to pay less for a property with a structure like a monopole nearby.

Patrick Dennis, the trustee for the Prince of Peace United Methodist Church, did speak in support of building the telecommunications tower.

Prior to calling for a motion to deny the special use permit request made by Verizon, Coles Supervisor Marty Nohe said, “I hate dealing with cases like this, because one of the effects they have…the total geography they have that we’re talking about is a very small area, but it seems like these things that deal with a very small area do the most to push neighbors against neighbors like this. I understand arguments on both sides to this…what’s been clear to me is that when we make decisions like this, we need to have a high level of community feedback…and the goal should be that feedback leads to a high level of community buy in. And that’s not what I heard tonight.”

The request was denied in a 6 to 1 vote.