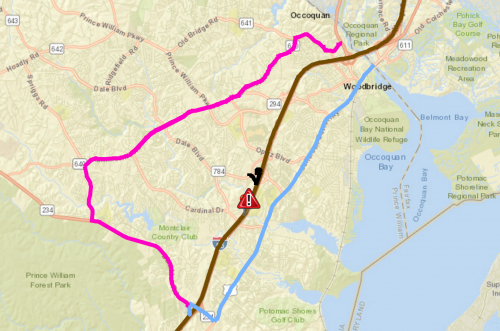 VDOT: ‘Avoid I-95 South’ in Dale City for next two weekends

The Virginia Department of Transportation (VDOT) is asking drivers to avoid I-95 southbound lanes in Dale City for the next two weekends.

According to VDOT, there are serious infrastructural issues with the bridge deck over the Neabsco Creek in Dale City, and several lanes will be closed to make emergency repairs.

“The bridge, originally built in 1963, has been regularly inspected and maintained, and remains safe, but is in urgent need of large-scale repairs to sections of the deck. The needed work will include saw-cutting and jackhammering out three bridge sections, the largest being 10 feet by 33 feet, replacing the reinforcing rebar, and pouring new concrete. Work will affect the bridge deck, joint, and abutment,” stated VDOT in a release.

“Due to the time needed to cut the large sections and set the concrete, completing this work over two weekends is necessary (as opposed to multiple overnight closures). VDOT also wants to ensure that the repairs are completed after spring breaks, but before heavy summer travel begins,” stated VDOT.

During the repairs, the 95 Express Lanes will still be open, but normal toll pricing based on travel conditions will be in effect and free travel in the toll lanes will be open to all HOV-3 qualifying vehicles.

“The lanes will be southbound beginning at 1 p.m. Friday to help alleviate backups, and will be monitored to change direction if needed. Drivers planning to head northbound on these weekends are asked to be aware of this, and to plan trips accordingly for heavier-than-usual return traffic, particularly on the two Sundays,” stated a release.

Here are some alternate routes for drivers:

East side: Route 1 southbound to Route 234 or Joplin Road northbound to I-95