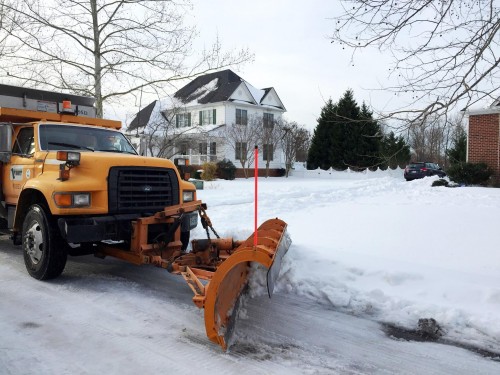 The Virginia Department of Transportation (VDOT) is prepping for snow – even though it’s still warm outside.

In Prince William, VDOT is responsible for maintaining and plowing much of the county’s roadways.

“We’re likely to have a winter, according to the National Weather Service, similar to what we had last year,” stated VDOT District Maintenance Engineer Lauren Mollerup in a release.

VDOT plows the region’s major roadways with the exceptions of a few cities and towns, said Mollerup. “We actually plow all of the interstates, primary and secondary roadways in Northern Virginia. VDOT does most of the primaries, interstates and secondaries in Prince William.”

Mollerup said that VDOT begins preparations early when snow is due. Trucks will begin icing the roads a few days in advance of the storm, if the roads aren’t colder than 20 degrees and the storm won’t begin as rain. “Three to five days before the storm is anticipated to arrive, we’ll pretreat with a brine solution, which is a salt and water mix, and we’ll treat most of our primary roadways and out interstate roadways, not sub-divisions or residential streets,” Mollerup said.

To find out more about VDOT’s winter resources and operations, visit www.virginiadot.org.