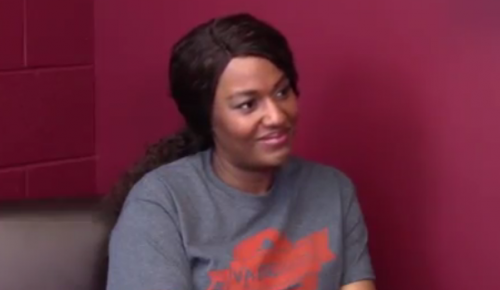 For Community Conversations this week, our host ST Billingsley sat down with Jacque Pitts, Director of VA StrEats, an organization that hosts events and advocates on behalf of food vendors in the area.

Q: So what is VA StrEats?

A: VA StrEats was born out of an event that we produced last year called the Woodbridge Food Truck Festival. We were in three different locations, actually four if you count Centerville. And because we moved around, it was a little confusing for us to be the Woodbridge Food Truck Festival in Manassas, or the Woodbridge Food Truck Festival in Centerville, so we looked for a type of branding that we could use throughout Virginia, that we would be consistent. Like, you know, McDonald’s, whether it’s in Alaska, or it’s in Florida, so we wanted to be like that with VA StrEats. That’s kind of where it started. And our goal with VA StrEats is to be here, and to kind of shine a light on food trucks and mobile food vending, and not just even mobile food vending, just mobile vending whatsoever, because now we have at our event a fashion truck. So, there’s a lot that happens out of a truck. So that’s kind of where VA StrEats started from.

Q: That’s very good. So, VA StrEats just isn’t about a food truck festival, there’s some advocacy that goes along with that.

A: Definitely. I think that’s one of the big misconceptions of VA StrEats that we’re festival producers only, and, um, that’s where we started, but we have migrated into also doing advocacy. And the reason why is because, there was a lot of gray areas when it came to what is the rules for food trucks in Prince William County and other counties. You know, Dumfries, the town of Dumfries, Manassas, Manassas Park, I think even down into Stafford and Fredericksburg. There is kind of a gray area, like, how do you operate? What do you need to do? And when we started producing the festivals, those questions started to come up, and they didn’t have definite answers. So in order to help, we decided, you know, if someone’s going to be the voice of food trucks, let it be us, because we are sitting here, we’re talking to the county on a regular basis, we’re talking to our food trucks on a regular basis. And we want to be the calm voice, that’s speaking for the food trucks to the county, because we want them to be favorable for the county. And that’s kind of where we stepped into that.

So, yes we do produce festivals, and that’s wonderful and great for the community, but you know, these are also business owners, and they want to be able to operate legally in the county and all these other de-restrictions. But they don’t know necessarily who to talk to. And with us having over a hundred and fifty, to two hundred trucks that we work with, it just makes sense for us to step into that advocacy role, and talk on behalf of the group, instead of everybody bringing their one individual problem, and bring everything to the county, and kind of help them, with how we would like to see food trucks operate within here.

Q:  So what are some of the challenges that you see for food trucks here in Prince William County?

A: Well one of the big things is—of course, Prince William County is very suburban, so it does not read like DC and Fairfax, where you can have on-street vending. So that’s one of the big—bigger differences with Prince William and some of the southern counties. There’s no place for you to vend on the street. So, some of the issues, is just clarity on where am I allowed to vend? Is it on private property? Do I need special permits to vend within the county? And do I need another special agreement or permit to vend on personal property? And what is considered personal property? Who owns personal property? Because there is also the misconception that the business owner is the property owner, and that’s not always in the case true.

So there’s a lot more steps, but where do you get this information from?  And who’s responsible for getting the information? And then who’s ultimate responsible for, I guess, the enforcement of that? And that’s where we get into a lot of the gray is that if—sometimes we were finding that today, yes, you’re legal to park here, tomorrow someone says no, but you can’t, and then you’re like yesterday it’s fine but today it’s not. You know, it’s hard and just like with any business owner, you just want to know what the rules are so you can abide by them. But those rules can change, depending on who you talk to.

A: It is. It is. Because, you know, there’s a lot of different departments, and because it’s new to Prince William—it’s not new, it’s just new to Prince William—so there’s a lot of departments in play. When working with food trucks, or starting a food truck in general, you know you have to get your business license, your health permit, you have to get your mobile vending permit, and then in Prince William County you need a surety bond. These are steps that you need to know what they are, and there’s a certain process. There’s a one, two, three process that you need to go to, but what we’re finding is that, not all of those departments talk to each other. So a process was put in place, but that doesn’t necessarily mean that if I go to the Police Department, they’re going to tell me to go to the Business Office.

They’re going to say your part with me is done. And so now your kind of on your own. So we’ve helped them kind of put that together, like what is the process. Now our goal is helping those ordinances be a little more realistic, for, um—just fair, equitable treatment of the mobile food trucks, but also, you know, if these are the departments within Prince William County that we need to have the okay on, they need to know that. We have to go them, and they need to have the okay. And some of them are like, really? Do I need that, or okay, this is fine with me, but it’s not like a check and balances type of circle. It’s here all these checks, get them. And no one’s checking that you’ve checked all the checks.

You know, so what we were finding out was the county couldn’t give us an accurate list of who were the registered food trucking the county, and their answer was ‘I don’t know’. Because some of them are registered with the county, and some of them are registered with the health department. So then, when we brought the festival–that’s where this came in—when we brought the festival, then they were like, wait a minute. This person’s not here, and this person’s not here. And it was kind of like, you know, we’re not trying to get anyone in trouble, we don’t want anyone to have to stop vending, but if we don’t know what the rules are, you can’t enforce rules that nobody knows.

Q: What are some events you have coming up in the future?

A: We actually start this Memorial Day Weekend, back at where we started at Gar-Field High School last year. We actually extended it to a two-day event. Last year it was one. So we’ll be there Saturday and Sunday. The VA StrEats Fest at Gar-Field. And where heading down to Fredericksburg in June, June 18th we’ll be at the Fredericksburg Fairgrounds, and then we come back this way to the Prince William Fairgrounds Fourth of July weekend. The second and third we’ll have our BBQ Throwdown—I’m looking forward to that one. BBQ. And then we head to Manassas Mall September the 24th for the Taste of Prince William County. And then we also go to the Nats Stadium October the 15th for Trucktober Fest.

We have two other fests that are in there: Love Herndon, that’s going to be in Herndon, Virginia and the Centerville Food Truck Festival in October. We actually have seven events happening this year. We’re excited about them. They’re spread throughout Northern Virginia. One of our goal is we want food trucks to be accessible to everyone, and not just those people who are in the DC, Fairfax, Arlington area. You know, we want people to see that these are mobile restaurants. They have some awesome food. Things that you’ve probably would have never tried before, but they’re coming off of a truck, and you’re like, ‘yay, I’ll eat it!’

Check back for the next episode of Community Conversations.

The proceeds of the VA StrEats Festival will benefit Garfield High School and No Kid Hungry. The festival will be hosted on May 28 and 29.