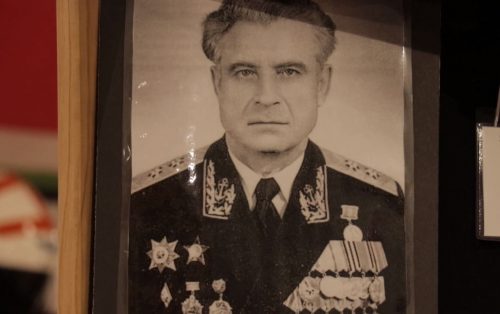 A story within the Cuban Missile Crisis

It was a close call for the United States and the Soviet Union.

Fifty-seven years ago, an event occurred that almost led to World War III.

Cold War Museum Chief Curator John DePerro retold the story and the role that Vasili Arkhipov, who served in the Soviet Navy, played.

An exhibit on Arkhipov is available at the museum, which is located at 7172 Lineweaver Road in Warrenton.

After the Cuban Missile Crisis started in 1962, a fleet of cargo ships traveled down the Atlantic Ocean to the Carribean Sea. Before them were diesel electric Foxtrot class submarines that were operated by Russians.

“Vasili Arkhipov is hitching a ride from Russia down to Cuba,” DePerro explained. “He wants to negotiate a treaty with the Cubans to park submarines in Cuba.”

The United States Navy dropped destroyers on four submarines, which submerge further down into the water.

During the next several days, their batteries drop to 1 percent. The air conditioning, which was built for the cooler Atlantic Ocean waters, also wasn’t working properly. This caused the engine room temperature to increase to about 140 degrees.

Three of the submarines surfaced and surrendered to the Americans, who just wanted them to be north of the line.

“The last sub — the B-59 — that captain, he’s Russian Navy and he decides that this is the day that they’re all going to die and they’re going to take as many Americans with them as they can,” DePerro said. “So, he initiates a countdown to fire of the one nuclear torpedo he has on board.”

Arkhipov, the captain’s waiting officer, was able to vote in the launch decision.

Russian captains, he explained to the captain, are allowed to launch nuclear torpedoes if they feel threatened. However, according to the American policy, only the president may approve a nuclear round. The United States thought the Soviet Union has the same policy.

“He says, ‘Look, you fire the round, well you’re in the middle of the Carribean. There’s only five destroyers out there, you’re not going to harm anything much,” DePerro said. “But the Americans will immediately notice the nuclear round go off, and they will presume that the Russians at Moscow authorized it, and within minutes the United States will launch on Moscow.”

Arkhipov suggested that they surface and surrender. The captain decided to follow his advice.

“We think he deserves a cake,” DePerro said. “His birthday is January the 30th, and we think every year there ought to be some drinks and formal recognition that he probably saved more lives than any other human being in the history of the world.”