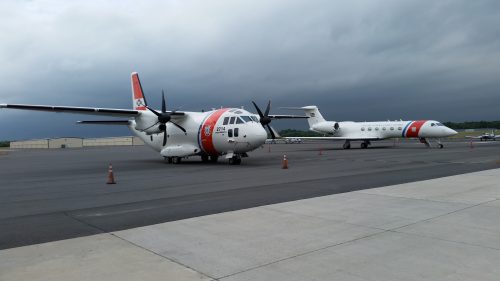 The U.S. Coast Guard is celebrating the 100th anniversary of the branch’s aviation efforts.

According to Director of the Manassas Airport Juan Rivera, nine Coast Guard aircraft were on the runway at the airport, getting ready to do a flyover of the Washington, D.C. area to celebrate.

“About a month and a half ago we got a call from a representative from the U.S. Coast Guard, asking if we would host them for their 100th year in aviation, and of course we jumped at the chance,” said Rivera.

In addition to today’s flyover, the Coast Guard will be putting on a display tomorrow at the Steven F. Udvar-Hazy Smithsonian Center at 14390 Air and Space Museum Parkway in Chantilly, according to U.S. Coast Guard Commander Brian McLaughlin.

“[We have] representation of every operational air craft the Coast Guard currently has, in celebration of the Coast Guard’s 100th year of saving lives and protecting our nation,” said McLaughlin.