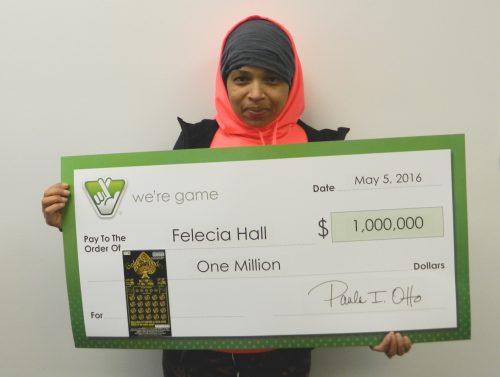 According to a release, Hall visited Connie’s Market in Triangle and purchased a ‘Golden Spades Scratcher’ ticket, while getting change for a taxi, so she could have lunch with her son.

It wasn’t until Hall sat down and ordered her lunch that she noticed she had won $1 million from that Virginia Lottery ticket, according to a release.

More on Hall’s story, from a release:

“I thought I was going to have a heart attack right there in the restaurant,” she said. “I couldn’t breathe.”
Ms. Hall, who lives in Triangle, said she had won $110 in the same game just the previous night.

She had the choice of taking the full $1 million prize over 30 years or a one-time cash option of $561,798 before taxes. She chose the cash option. In addition, the store receives a $10,000 bonus from the Lottery for selling the winning ticket.

Ms. Hall works as a surgical technician. She said she intends to use her winnings to take care of her family.
“It just seems a little surreal,” she said as she claimed her prize.