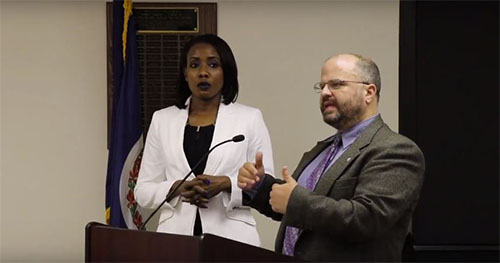 Commuters and county residents may see a bit less traffic congestion on Route 1 in Dumfries in the coming years.

Relieving congestion is one goal of a widening project that the Northern Virginia Transportation Authority (NVTA) is helping fund.

Executive Director Monica Backmon announced at a recent Dumfries Town Hall meeting that the regional organization is awarding nearly $45 million in right-of-way for the Route 1 project.

NVTA is made up of four counties and five cities, according to Supervisor Marty Nohe, who serves as NVTA’s chairman. The body allocates transportation funds that can only be used in Northern Virginia.

The NVTA funding will be used for the Route 1 widening project, which is expected to cost between $110 million and $115 million total.

As part of the project, Route 1 would be widened to six 12-foot lanes – three going northbound and three going southbound – for 2 miles, according to Backmon. A raised median, bike lanes, sidewalks and shared-use paths would be added, as well.

The project, according to Nohe, is critical.

“When you allocate … almost $45 million to a project, that sends a message on behalf of the region that this is a regional priority now,” he told meeting attendees. “At NVTA, we don’t invest this kind of money in a project that we think is going to get to the design stage and then stop.”

Widening Route 1 would not only address traffic congestion. It would also play a significant role on the development of the Town of Dumfries and other parts of Northern Virginia.

Route 1, Nohe explained, is a “vital link” between Marine Corps Base Quantico and Fort Belvoir.

“Our ability to continue to rely on those military jobs as a big part of the economy of our region relies heavily on people being able to get through the town, but also of the ability of people who live in this town every day – their ability to get work, grow their businesses, create jobs,” Nohe said. “They need to be able to get out the east side of Route 1 and get to the rest of Northern Virginia to do business.”

NVTA has previously provided funding for the Route 1 project.

“When we did our FY 2015-2016 program, which was adopted in April 2015, the authority did award $6.9 million for some design work, some engineering and some environmental work,” Backmon said.

Some projects could be “leveraged” by SMART SCALE, according to Backmon.

“It’s our goal that the $71.7 million estimated cost of construction can be picked up from SMART SCALE,” she said. “If not, you still have an opportunity to show enough project advancement for the authority’s next call for project, or when we enter our biannual update.”