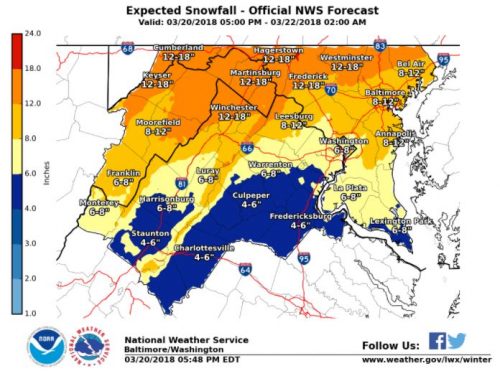 Residents could see between three and seven inches of snow on Wednesday, according to the National Weather Service (NWS).

There is a 90 percent chance of precipitation, and the snow fall could be heavy at times.

Tonight, less than an inch of snow and sleet is expected before 11 p.m., and there is a 90 percent chance of precipitation.

NWS is calling for less than an inch of snow on Wednesday and an 80 percent chance of precipitation.

The Virginia Department of Transportation (VDOT) is asking drivers to avoid traveling tonight and throughout the day tomorrow.

VDOT crew members have been stationed alongside Northern Virginia roads and are prepared to treat them, according to a release. They plan to start plowing once it has snowed two inches.

Commuters are encouraged to stay updated on the latest forecast, and make sure their gas tanks are filled.

VDOT is also asking residents to provide a wider path for snow plows by parking in driveways or on the odd-numbered side of their street.

For updates on traffic conditions and lane closures, visit www.511virginia.org or check the 511 mobile app.