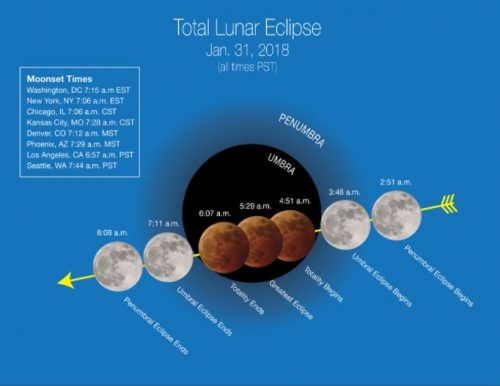 Stargazers have a sight to see on Wednesday, but they may have to get up a little early to catch a glimpse of it.

A “super blue blood moon” eclipse will occur on Wednesday morning, according to a release from the National Aeronautics and Space Administration (NASA).

This phenomenon occurs when the moon is closest to Earth in its orbit, and during a month’s second full moon, which is called a “blue moon,” NASA says.

The Moon becomes a “blood moon” when it passes through the Earth’s shadow, giving off a “reddish tint.”

“For the (continental) U.S., the viewing will be best in the West,” Gordon Johnston, program executive and lunar blogger at NASA Headquarters in Washington, stated in the release. “Set your alarm early and go out and take a look.”

The eclipse, according to Johnston, could be difficult to see on the eastern side of the country.

“The eclipse begins at 5:51 AM ET, as the Moon is about to set in the western sky, and the sky is getting lighter in the east,” Johnston said.

Those unable to see the eclipse can watch it live on NASA TV and NASA.gov/live.