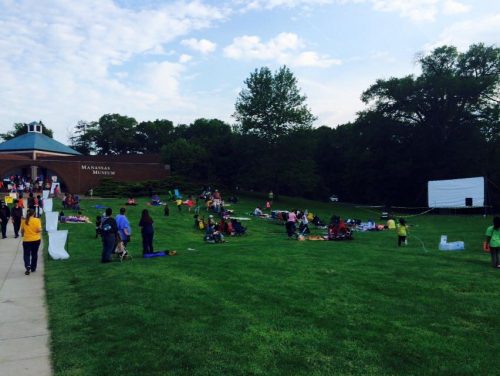 Check out the summer fun lineup for the Manassas Museum

New exhibits, summer camps, bike tours, and more are all on the summer lineup for the Manassas Museum.

Here are the summer activities you and your family can take part in, from a release:

For four days, children will immerse themselves in Civil War life. They will learn how science and math applications changed the course of the war and our nation’s history, and experiment with technology that was developed then and used now. Call 703-368-1873 or visit www.manassasmuseum.org to register.

Does your child have what it takes to be an archaeologist? Would they like to be part of an archaeological dig? During this camp, they will at setting up a dig site, shoveling, sifting and learning about the artifacts we hope to discover on the museum grounds. After digging and sifting in the morning, they will enjoy a fun afternoon at the Stonewall Park Pool. Call 703-368-1873 or visit www.manassasmuseum.org to register.

Historic Downtown Walking Tours; Through October; Thursdays & Fridays at 12 Noon; free; meet at the Manassas Museum
Why weren’t the battles of Manassas fought in what is now the City of Manassas?  Participants will learn about how Manassas began and significant episodes of our community’s past.  Visitors need to wear comfortable walking shoes and dress appropriately for the temperature and for the weather.

Museum at the Market; Through October; Saturdays from 9 a.m. till 1 p.m.; free; Lot B, Prince William and West Streets
Write with a quill pen or break a spy code.  These are just some of the activities the Museum staff feature at the Saturday Farmer’s Market that are fun for the whole family. Visit the City of Manassas Farmer’s Market Facebook page for each week’s activity.

New Exhibit:  ; Through August 28; free
Guest Curator John Hennessy’s exhibit looks at post-war Virginia from Reconstruction through the early 1900s. For African–Americans, the tumultuous decades after the Civil War offered both tantalizing hints of racial progress and the heartbreaking realities of political exclusion. In Prince William County and across America, African–Americans struggled for rights, dignity, education, and a voice in the political process—for “light and liberty.” The exhibit includes artifacts never before displayed and an interactive activity for young people.

New Exhibit: John Singleton Mosby: Lawyer, Soldier, Statesman; June 3-August 28; free
Created by guest curator David Goetz to honor the 100th anniversary of the death of John Mosby, this exhibit will examine the many facets of Colonel John S. Mosby’s life, including his career as a lawyer and diplomat, and will include some of his personal artifacts. Mosby used cunning, audacity and great intelligence to rise from private to full colonel in four years in the Confederate army, ultimately organizing and commanding the fearsome 43rd Battalion, Virginia Cavalry (Mosby’s Rangers) the last two years of the war.

Van Tours; June 11 & 18, July 9 & 16, and August 13 & 20; 11 a.m. -4 p.m.; $75
Where did the Confederate Army go after the Battle of First Manassas? Did Washington sleep here? Have you ever noticed historic signs throughout Northern Virginia and want to stop and read them? This is your chance to answer these and other questions and to learn about the rich history of the area. The tour will include food and an (adult) beverage at a local attraction.Call 703-368-1873 or visit www.manassasmuseum.org for tickets.

In his will, George Washington freed his “mulatto man William” and bestowed upon him a lifetime annuity. Thompson explores how this unusual act of generosity appears even more peculiar given the fact that Washington shunned his servant through the last nine years of his life and did not give him an audience as he lay dying. Washington had acquired his “mulatto” man from his cousin in 1767. What was the mysterious bond that tied them together for thirty-two years and induced Washington to provide for Billy when he was gone?

When Virginia voted to secede, two Fauquier County families, like the nation around them, were forced apart. This novel, based on real events, recounts the division of a small community during the Civil War.

By the middle of the nineteenth century, industrialization and military-technological innovation were beginning to alter the character and conditions of warfare. Occurring in the midst of these far-reaching changes, the American Civil War straddled two ages; it can be labeled both the last great preindustrial war and the first major war of the industrial age.

Learn surprising stories from the emerging town of Manassas and witness the creation of the Manassas National Battlefield Park, as told through vintage post cards from the early 1900s through the late twentieth century. The post cards of the era depict places, businesses, and streetscapes not found on other images of the time, and offer a glimpse into life in this post-Civil War town. All book sales benefit Liberia Plantation’s restoration.

Enjoy music, entertainment and fun for the whole family during the annual event on the museum lawn held in conjunction with the Manassas City Police.

Enjoy free events for all ages and interests at the museum, in Historic Downtown, and at Liberia Plantation. Please check the latest schedule at manassasmuseum.org.