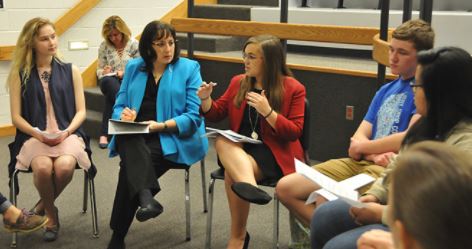 Kate Arnold, a Hylton High School senior and student representative for Prince William County Public Schools’ (PWCS) School Board, led a meeting at Battlefield High School in Haymarket, according to a release.

“Though our attendance was a bit on the smaller side, we ended up having a much more intimate conversation in the form of a round table discussion,” Arnold said in a release. “As well as having an honest conversation with students about happenings in and around their school, I gained a great amount of insight from the conversation, and I look forward to talking with many more students in the future.”

“The most personally impactful conversation we had was that of mental health in public schools,” Arnold said. “This county is home to high-achieving students, and as we push them to achieve more than ever before, we must also offer them support for any issues intrinsic or extrinsic stress may cause.”

Additional town hall meetings have been scheduled. Here are the dates, times and locations of the meetings: