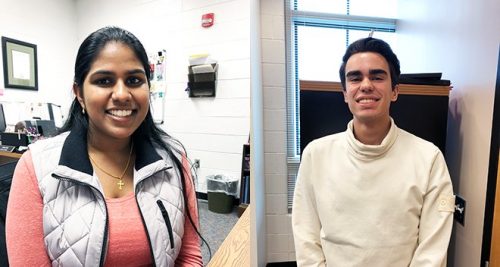 NTMOT, which was held St. Louis, was a four-day conference where “students dialogue with proven adult leaders, broaden their horizons by interacting with youth leaders of diverse backgrounds, enhance leadership skills with seminars by dynamic professionals and national political leaders, and participate in small group experiential learning opportunities,” according to a release.

Varghese and Lash were among 68 students selected across the United States to attend. They were selected through the Youth Salute Program.

“I really enjoyed it. It was really interesting to hear different perspectives from people across the nation. It was a safe space and you could talk freely,” stated Varghese in a release when speaking about the Youth Salute Program.

“I wouldn’t trade the experience for anything. The whole event was around breaking down who we were so we could work together by the end of the week. I developed a deep understanding of who I am and how I can better society,” stated Lash in a release.

More on the program and their experience, from a release:

Varghese and Lash said the students openly discussed a variety of issues, including wealth disparity, racial oppression and educational disparity. They also had an opportunity to tour Washington University in St. Louis.

Varghese said she learned that sometimes it is hard to complete group activities when everyone in the group is a leader.

“Now, whenever I am in a group setting, I make sure there is equal participation and allow everyone to voice their opinion,” she said.

Lash said he developed a more profound understanding of the impact of educational disparity and how it affects society. He said that after talking with students from across the country, he feels like he has received an excellent education in PWCS.

“This is a world-class education we are getting here at Patriot High School,” he said. Lash previously attended Glen Kirk Elementary School and Gainesville Middle School. He also attended the Governor’s School @ Innovation Park before earning an internship at NASA Goddard Space Flight Center, where he studied electromagnetic satellite thrusters.

Lash, a busy student, participates in VEX Robotics, SeaPerch Underwater Robotics, Science National Honor Society (president), National English Honor Society, Social Studies Honor Society, and All-District and All-County Bands. He is an Eagle Scout and has earned several awards at the state and national level in Precision Air Rifle and Smallbore Rifle competitions. Lash has earned an appointment in the U.S. Coast Guard Academy, following in the footsteps of his older brother, father and both grandfathers, all of whom served in the military. He said he is open-minded about what he might do upon graduating from the Academy.