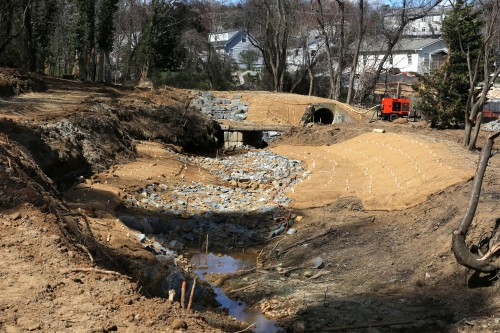 $2.5M to be used for stream restoration in Prince William

More on the grant funding, from a release:

The grants, which are funded through Virginia’s Stormwater Local Assistance Fund and matched using the County’s Stormwater Management Fees, will help the county meet state and federal regulations to repair streams to prevent sediments that contain nutrients, such as nitrogen and phosphorus, from flowing through the local streams and rivers and on to the Chesapeake Bay.

Because Virginia is in the Chesapeake Bay Watershed, the Environmental Protection Agency (EPA) regulates how much sediment from streams and other bodies of water is allowed to flow into the bay daily, according to a release.

Most recently the county received a $665,000 grant, which will go toward funding the Powell’s Creek restoration project, according to a release.

The project is scheduled to be completed in late 2017, early 2018, stated a release.

Restoration to the Cow Branch stream was completed in 2015. The Reach 5 stream restoration is scheduled to begin in 2017, and work on East Longview Creek is set to begin this May, according to a release.

More on upcoming projects and requirements for the county, from a release:

Ben Eib, an engineer with Public Works, said the county is working on a list of prioritized projects which is updated annually based on available funding. “As the grants come in, the department assigns the money to projects. These grants significantly extend our available funding for the next year and beyond, so that we are able to implement more projects.”

Over the next 10 to 15 years, the number of projects will have to increase in order to meet conditions of the County’s Municipal Separate Storm Sewer System, or MS4 permit.  This permit includes a Chesapeake Bay Special Condition, which requires jurisdictions to meet certain pollutant reductions.  These reductions are based on modeling prepared as part of the EPA’s Chesapeake Bay Total Maximum Daily load, or TMDL, and subsequently committed to by the Commonwealth in the Virginia Watershed Implementation Plans. The TMDL is essentially a pollution diet, which establishes an acceptable pollutant load that improves the Chesapeake Bay. Jurisdictions receive MS4 permits that require decreases in the TMDL in five-year increments. Under the current five-year permit, which was issued for 2015 to 2019, the county must reduce its daily load by five percent. The next five-year permit will mandate that the county decrease its daily load by 35 percent. Under the last permit, the county must meet 100 percent of TMDL regulations.

“Basically, we have 15 years to meet 100 percent of the required pollutant reductions through the implementation of various best management practices,” Eib said.  “For the first permit cycle, we are in the process of determining the required reductions and identifying what projects will be implemented to meet or exceed the first milestone.”