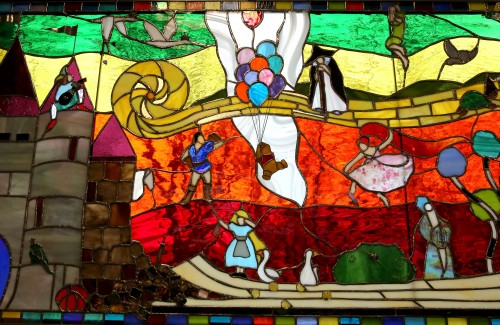 A long-time dream was fulfilled at the Chinn Park Library in Woodbridge.

Stained-glass artist Jeanie Dunivin, a Woodbridge resident, had a dream of hanging more stained-glass artwork at the library, but when she became ill the project got put on hold, according to a Prince William County government release.

Dunivin passed away in 2015, but her dream – while delayed – didn’t die with her. Instead, two of her friends, Erin O’Brien Jones and Krystyn Haydash, decided to carry on her work and created a large stained-glass piece to hang at the library, stated a release.

“It’s extremely sad that she passed, but at the same time, she had a plan for us because everything happened in such a natural way,” stated Haydash in a release.

Haydash and O’Brien worked together for nine months to finish the work that Dunivin had started, which now hangs in the children’s section of Chinn Park Library, stated a release.

According to a release, Assistant Library Director Deborah Wright said that the piece has “beautiful, vibrant colors” and “lots of details”.

“It blends three different artists’ perspectives into something that’s similar to what we have hanging … which is great. I think it’s important because it’s one more way to promote our love of literature, but also tying in now, the artistic aspect of it,” stated Wright in a release.

Haydash hopes that the children will enjoy the piece.