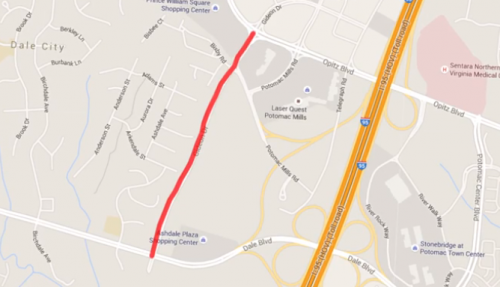 Walking from Dale Boulevard to the Potomac Mills Mall just got a lot easier for pedestrians.

According to a county release, a $2.38 million improvement project was just completed along Gideon Drive, to put in a sidewalk along the entire length of the roadway.

A combination of federal, state and local funds were used to pay for the project, according to a county release.

Neabsco Supervisor John Jenkins, who presides over the area where the project was completed, said that the project will make it safer for pedestrians that use Gideon Road to walk to the mall.

“It gives them a guarded way to get from the residential areas up to Potomac Mills where there’s shops, restaurants and other centers…that they need to access for their normal supplies and recreational needs,” stated Jenkins in a release.

A county release stated that around 25,000 cars drive on Gideon Drive daily.

“We have at least 100 people each day of the week that use this sidewalk and many more than that during the weekend,” stated Jenkins in a release.

In addition to providing easier access to Potomac Mills, the sidewalk will also provide connecting access to other main sidewalks.

“The project provides a lot of connectivity for…the Ashdale communities and those business centers located in and around Ashdale Plaza. The sidewalk itself is integrated into the bikes and trails program that the county has; and as we continue to develop that part of Dale City, on the eastern end, we will find that access will be greatly improved,” stated Jenkins in a release.