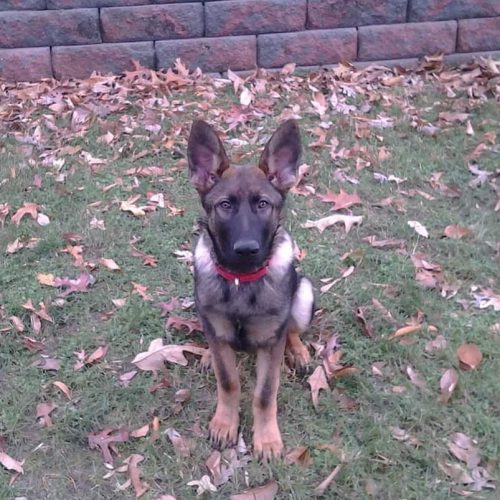 Semper K9 Assistance Dogs is a non-profit based in Prince William County that rescues and trains dogs to act as service dogs for wounded, ill, and injured veterans from the United States military.

Both dogs were donated to the organization by Des Dunne Blau Zeile Kennel, according to a release. The dogs are currently being trained by the organization as service animals, and will eventually be given to veterans associated with the program.

More on Rona, from a release:

She is a German Shepherd donated by Des Dunne Blau Zeile Kennel. Rona is named in honor of SSD Rona K459 who completed two combat tours with our Executive Director in 2007 & 2008 to Iraq.

Baity trained Rona to be a Specialized Search Dog with the IDF’s (Israeli Defence Forces) Oketz Unit in Israel. For more details on this program you can read the book ‘Top Dog: The Story of Marine Hero Lucca’ where it states “The U.S. Department of Defense wanted a few top American handlers to learn how to train and work with these dogs.” Baity was one of the four chosen in all of the country. He was paired with Rona and they completed training in Israel before deploying together.

Rona and Baity completed over 80 combat missions and located several insurgent cache and improvised explosive devices (IEDs) in Baghdad and surrounding locations. Rona’s service can be credited to saving the lives of countless U.S. Service Members and coalition forces.

Rona’s combat vest is currently on display at Manassas Museum’s Not For Glory: The Stories of Desert Storm and Operation Iraqi Freedom exhibit until February 2017.

More on Timmy, from a release:

He is a German Shepherd donated by Des Dunne Blau Zeile Kennel. Timmy is named in memory of Master Sergeant Tim Hankins, US Army Special Forces.

Born in Orange, Texas, on December 29, 1975, Timothy was the son of Dennis Hankins and Carolyn Reese Hankins. He was a 1994 graduate of West Orange- Stark High School where he played football and was a member of the Drama Club that won state level competitions his senior year. Timothy loved to play guitar and learn about his family history.

He had a lifelong dream of joining the United States Army, which he fulfilled in 1995. He served in the Unites States Army for 19 years and the Texas National Guard for 2 years. His tours of duty include Iraq, Afghanistan, Italy, England, Scotland, Haiti, and others.

“Timmy was a perfectionist when it came to his craft. His tactical knowledge and skill set was that of only a true operator.” said Paul Davis, close friend of Hankins. “What made him really special is that he truly cared that you understood the instruction. He knew how important it was for people to to know how to defend themselves [in combat] and he was passionate about it.”

Hankins passed away on October 8, 2016, while stationed at McDill Air Force Base in Tampa, Florida. His final resting place is Hillcrest Memorial Gardens in Orange, Texas. He is survived by his wife Casey Hankins; and sons, Timothy John Hankins II and Reese Dillon Hankins.