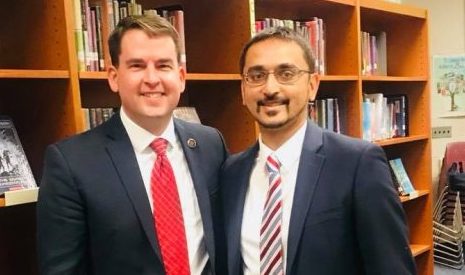 One of Prince William Public School’s (PWCS) own has been named the new Secretary of Education.

“If we want to build an economy that works better for every family, no matter who you are, no matter where you live, we must begin with the foundation of a world-class education. We can accomplish it if we support our educators and school support professionals, uphold accountability, invest in and expand STEAM curriculum, and make early childhood education a priority. I look forward to seeing what new heights Virginia’s education system is able to reach in the next four years with the team I am announcing today,” stated Northam.

“We are excited to have someone so gifted and familiar with Prince William County Public Schools serving in this capacity at the state level. Mr. Qarni’s powerful advocacy for students and teachers promises great things for schools across the commonwealth. We look forward to working with him to continue to improve education for all,” stated Walts, in a release.

More on Qarni, from a release:

Qarni has taught for PWCS since 2009, and currently teaches civics and U.S. History. He has also served as a GED Night School Instructor. In 2016, he was awarded the Dale City Teacher of the Year. Governor Terry McAuliffe appointed Qarni to the Small Business Commission in 2013. He has been a member of the Virginia Education Association since 2008 and ran for the House of Delegates in 2013 and Senate of Virginia in 2015. He is a former Sergeant of the United States Marine Corps, Reserves, and was deployed to Iraq in 2003 on Active Duty Assignment during Operation Iraqi Freedom.