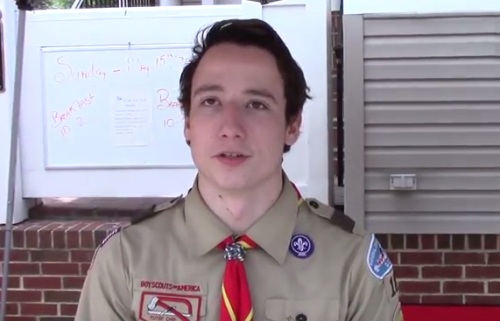 Boy Scout Mark Simonsen from Troop 1853 is hoping to improve the community with his Eagle Scout project.

Simonsen, who is a junior at West Springfield High School, is renovating and restoring a community basketball court at Middle Run Park for his project.

“We’re going to power wash the court, to get rid of all the moss and make it a better [space] and then we’re going to install a sign in the beginning of the path to show the community where the basketball court is and make it more accessible, and then we’re gonna add a bench on the side of the court, so that people can sit and enjoy basketball. So it’s an all-around benefit to the community, and it should be pretty beneficial,” said Simonsen.

According to Simonsen, the area has fallen into disrepair over the past few years, so he’s hoping that his Eagle Project will transform the space.

Fox Hunt Swim and Tennis Club, which owns the space, gave Simonsen permission to complete the project. Simonsen will be paying for the project with funds donated by the club, and through a fundraising bake sale he held at the Occoquan River Fest.