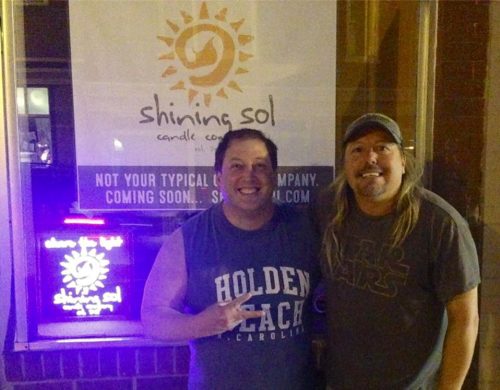 According to a release, Evick, who is a Manassas resident, began Shining Sol Candle Company in 2012 while on break from a nine month United States tour. The company has been operating using an online storefront, and this will be Evick’s first brick-and-mortar location.

A ribbon cutting ceremony will be held for the store at 5 p.m. at 9109 Center Street, according to a release.

More on Evick and Shining Sol, from a release:

As an advocate of ‘going green’, Evick decided to use soy wax and wooden wicks allowing them to source all of their ingredients from farms across America. As the company grew, Evick enlisted the expertise of Sara Rodriguiz to continue moving the company forward with new candle scents as Evick returned to tour. Shining Sol’s newest partner is Deron Blevins, a local Manassas native and childhood friend of Evick. Blevins has since strengthened Shining Sol’s web development, graphic design and marketing.