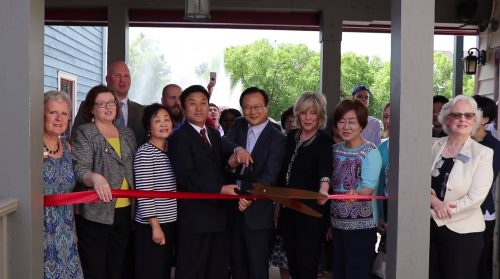 A grand opening and ribbon cutting ceremony was held at Lakeside Cafe and Grill on Thursday.

The business, located at Tackett’s Mill, features a bakery that opened last month, a bar and an American restaurant.

The restaurant and cafe has been a long time coming, according to Prince William Chamber of Commerce Chair-Elect Betty Dean.

“We’ve been waiting for something good to come in here at Tackett’s Mill, and now we have the Lakeside Cafe and Grill,” Dean said. “We’re really excited that it’s here.”

Dean, an Occoquan resident, added that she plans to be a regular customer of Lakeside Cafe and Grill.

Supervisor Ruth Anderson echoed Dean’s remarks, saying that community members have been interested in seeing a business move into the space.

“For the last couple of years, we [kept] walking by this empty restaurant, hoping … that somebody would come and begin ownership of this restaurant and start serving the people,” Anderson said.

“Welcome to the neighborhood, best of luck with your business, and I’ll be a frequent visitor along with Betty,” Anderson said.