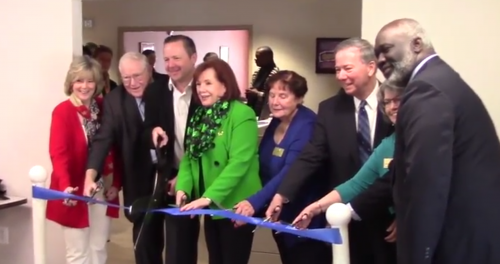 A ribbon cutting ceremony was held yesterday at the Bill Mehr Drop-In Center for the Homeless in Woodbridge.

The center, located at 14716 Potomac Mills Road, provides shelter and services to the area’s homeless.

According to a release, back in 2015, the Prince William Board of County Supervisors allocated $500,000 in county funding to renovate the building, and move Human Services operations to the site.

During the ceremony, former Supervisor Hilda Barg spoke about the center’s namesake, Bill Mehr. Mehr was a big proponent in opening the center, and died back in 2010.

“He would go to his job on the train, in Washington [D.C.] every day. When Bill got off the train, he usually had a bag of sandwiches, that he would go out in the woods, and pass out to people, making sure that they had as much help as he, at the time, could provide,” said Barg.

The Prince William County Department of Social Services works with the Cooperative Council of Ministries, a group comprised of Prince William-based churches, to run the center and provide services to the homeless.