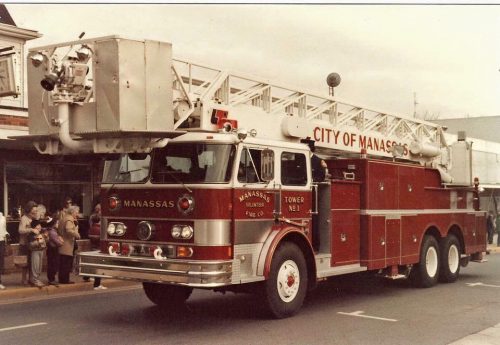 After 42 years of service in fire and rescue, Manassas Fire and Rescue Chief Brett Bowman will be retiring at the end of this month.

Bowman began his career in fire and rescue back in 1974, as a volunteer for the Manassas Volunteer Fire Company.

“I became involved at an early age. [I was] born and raised here in Manassas…being involved in the fire company was something my father had been involved in – my neighbor was the Chief previously, so I had a lot of interactions with the Volunteer Fire Company,” said Bowman.

After becoming a captain at the Harrisonburg Fire Company during his time as a student at James Madison University, a firefighter for Prince William County Fire and Rescue, a firefighter for the City of Manassas and then a volunteer at the Stonewall Jackson Volunteer Fire Company, Bowman was promoted through the ranks to his current position as chief.

According to Bowman, a lot has changed since he began his career in the 70s.

“Where it used to be a predominately volunteer fire and rescue provision in the 70s with career personnel working weekdays basically 7 to 5. The volunteer community, not just here in Manassas but throughout the country, has started to fade and dwindle a little bit, so the career staff has had to start working 24 hour shifts, and that’s true throughout Prince William County and Manassas. And nothing to take away from volunteers, but there’s a lot of pressure on people today: work, life, dual family incomes. To get all the training that’s required is very difficult, and that is one of the things that has changed over the years,” said Bowman.

Bowman also spoke about how technology in fire and rescue has changed over the years.

“Technology has changed greatly over the years…back in the day to find a fire we had—we got alerted by the fire siren. We didn’t have miniatures like we have today, so we had to go to the fire station find out where the incident was and then respond. Now we have instant communications. Technology provides the information of where the fire is immediately. We also, back in the day, hand-drew the maps of all the streets of how to get to a fire. So we’d look up the address in our street-book, know how to get there. Now we have computers that automatically route us the quickest way to the incident,” said Bowman.

Following the announcement of Bowman’s impending retirement, Robert Clemons was named as the new incoming Manassas Fire and Rescue Chief. According to a release, Clemons has 28 years of career firefighter experience and 10 years volunteer experience, and is a member of the International Association of Fire Chiefs, the Fire Department Safety Officers Association, and the Society for Human Resources Management.

Bowman spoke highly of Clemons, and felt that he was comfortable ‘passing the torch’ to him.

“I’ve known Chief Clemons for over 30 years now. He brings an excitement and energy that will be well received here in Manassas. His ability to work with other people is outstanding, and I know that he will do an excellent job. And as I’ve talked to him, I’ve told him I’ve tried to set it up for his success,” said Bowman.

To begin his retirement, Bowman intends to visit Europe with his wife before retiring to a beach home in the Ocean Beach Isle area of North Carolina.