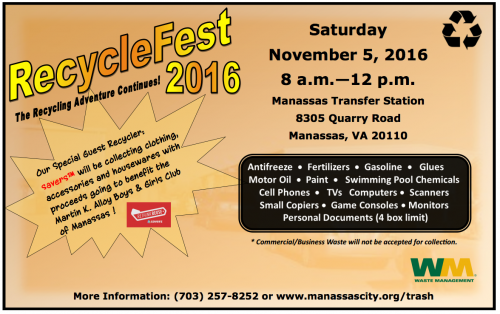 Recycling may not seem like fun, but it can be at the Fall Recyclefest on November 5 in Manassas.

According to a release, Manassas is hosting the event to celebrate “America Recycles Day” from 8 a.m. to 12 p.m. at the Manassas Transfer Station at 8305 Quarry Road.

During the event, Manassas residents can drop off household hazardous waste, electronic waste, and shred up to four boxes of paper documents, free of charge.

“Proof of residency is required to enter and no commercial waste will be accepted,” stated a release.