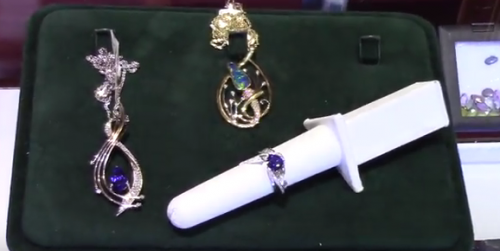 Quinn’s Goldsmith celebrates six years, gives back to the community

To celebrate their sixth anniversary at their Stonebridge at Potomac Town Center location, Quinn’s Goldsmith is having an anniversary sale.

The company is family-owned, and started with one man’s dream to make beautiful jewelry. The company started back in a small storefront in Occoquan, and has grown over the many decades they’ve been in business.

The sale begins tomorrow, March 11, and runs for the next two weeks, with everything in the store on sale. The sale extends to Quinn’s Occoquan store as well.

What helps Quinn’s stand out in the industry

There are several larger jewelry chains in the Northern Virginia area, but according to Quinn, there are many things that set Quinn’s Goldsmith apart.

The store also does a variety of custom pieces, often handcrafted by Quinn himself.

“I’ll wake up in the middle of the night and I’ll have to draw. I’ll draw something and I’ll come in…and I’ll carve it out of wax, cast it in gold, set the stones, and it’s done,” said Quinn.

For Quinn, being able to help people repair their existing jewelry is something he really enjoys.

“It’s very gratifying when somebody brings in a ring that was their great-grandmother’s, in really bad shape, and we make it look like the day it was purchased,” Quinn said.

Quinn also loves being able to take memories from customer’s loved ones, and using his artistic skill to make sentimental pieces and keepsakes.

“I’m making a ring for a young lady…unfortunately her mom passed away five years or so ago, and her dad just passed away. And I’m actually making a ring from a pendant that her mom wore, and some old jewelry. We’re putting it all together into a nice, beautiful ring,” said Quinn.

Giving back to the community

In addition to celebrating their anniversary, Quinn’s has decided to give back to the community by giving away $1,000 worth of services and repairs to a deserving individual or couple in the area.

“In 2017 we decided – how are we going to give back to the community this year? So I thought it would be something to do something a little bit different…maybe we can help a young couple, or a military couple…struggling to get everything they need for their wedding,” said Quinn’s Goldsmith owner Terry Quinn.

Quinn gave away the first prize back in January, and hopes to get more entries for the coming months. To enter to win, “like” the Quinn’s Goldsmith Facebook page, and write to them about your story, or the story of someone you’d like to nominate for the prize.

This post was sponsored by Quinn’s Goldsmith, in partnership with What’s Up Prince William.