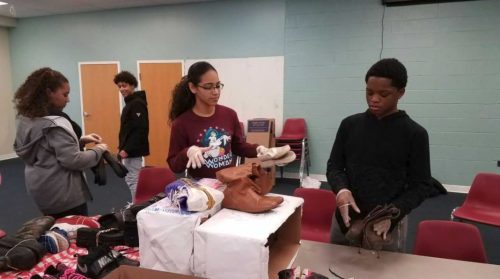 Several unwanted shoes are finding a new purpose in other countries after a recent collection drive.

From January 25 through February 28, The Martin K. Alloy Boys & Girls Club of Manassas collected shoes for Soles4Souls, a non-profit that distributes clothing around the world.

The World Bank has estimated that about 900 million people, including 400 million children, survive on less than $1.90 each day, according to a release.

Many of the children don’t have access to shoes, which can lead to significant health issues.

The club sought to collect 50 pairs.

It didn’t just meet its goal, however. It exceeded its by collecting 115 pairs from community members and a company.

Many of the club’s members helped by designing shoe drive signs and telling others about the collection.

“[They were] pretty much the driving force behind it,” Harrington said.

“I was happy that we were able to get some corporate support within the community, as well,” Harrington said.

The collected shoes will be delivered to Puerto Rico during the first week in April. They will also be brought to the Dominican Republic the following week.