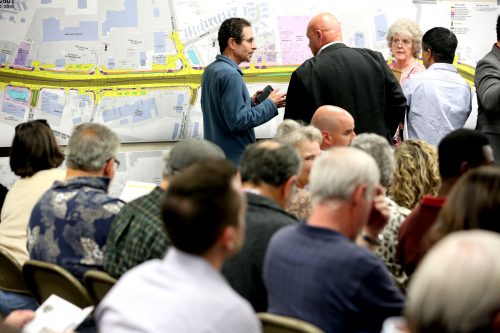 A public hearing is being held in Woodbridge on November 16 to give residents time to comment on the Route 1 project.

According to a release, the public hearing is being held to solicit comments from residents about the “proposed location and design for the project to widen U.S. Route 1 between Featherstone Road and Mary’s Way.”

The public hearing will be held from 7 p.m. to 9 p.m. at Fred Lynn Middle School at 1650 Prince William Parkway, stated a release.

The Route 1 expansion project was prompted by the growing amount of traffic congestion seen along the road over the past several years.

More on the proposed project, from a release:

The $100-million improvement project will widen the existing, undivided four-lane highway to a six-lane, divided highway and will include a multi-use trail on the east side of U.S. 1 with a sidewalk on the west side of the road. The project will include traffic light synchronization and undergrounding utilities.

Residents who attend the meeting will be able to submit oral or written comments on the project.

To review the project plans before the hearing, residents can visit the Prince William County Department of Transportation at 5 County Complex Court, Suite 290, in Woodbridge.