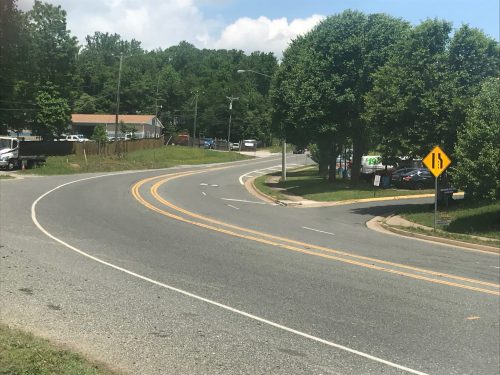 Traffic on Neabsco Mills Road could be better.

Users of the road, which runs between Freedom High School and Northern Virginia Community College’s Woodbridge campus, often find themselves sitting behind several other commuters at its three traffic lights.

According to Supervisor Frank Principi, this isn’t a new issue.

“For a decade now, I have been hearing directly from business owners, constituents, commuters — in particular — that Neabsco Mills Road is the most important choke point that we need to deal with in Woodbridge,” Principi said.

To address the problem, officials have proposed a road widening project. Community members learned more details about the plan at an information meeting on Monday.

“There are impacts,” Principi told attendees. “And we want to make sure you understand what those impacts are, and we want to work with you — as part of your local and state government — to ensure that we do everything possible to mitigate the negative impacts of this construction project on your businesses, on your commute, on your homes.”

A shared-use trail and a sidewalk will also be added along the road, which is 0.8 miles.

A public hearing is expected to be held this summer. If the proposed project if approved, the relocation of utilities would begin between winter 2019 and spring 2020.

Construction is anticipated to be completed by winter 2022.

Meeting attendees ask Canizales about how the proposed project would impact traffic.

One county resident asked if a left turn lane could be added at the entrance of Hanco Center off Neabsco Mills Road.

“We can examine it,” Canizales said. “Just know that it’s very difficult to get VDOT to agree to putting something in that close to a major intersection. It becomes an access management issue for them. But we can look at it. There have been exemptions made.”