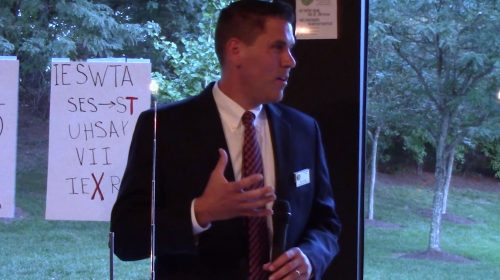 Potential development in western Prince William could impact community members in other parts of the county.

The Prince William Conservation Alliance and the Mid-County Civic Association hosted a community conversation about the Rural Crescent on Monday.

Attendees of the meeting, which was held at Water’s End Brewery in Lake Ridge, learned about how proposed changes to rural area policies could impact the Rural Crescent.

Changes impact the Rural Crescent wouldn’t just impact its residents. They would affect the entire county.

The Rural Crescent, Kooyoomjian explained, is a “county wide issue.”

“It doesn’t just involve the rural crescent. The fact that it’s there is important to me personally and to other people who value the rural crescent. The people that live there, especially, have a huge stake in it,” Kooyoomjian said. “Some people feel that it’s their bank account, they want to cash it in. But what are they cashing it in for? We have to debate that and discuss all that.”

Candland added that the Rural Crescent doesn’t only revolve around green spaces and history.

The issue also impacts other areas, including schools and taxes.

“It impacts you, your family, your grandkids in a very real way — whether it’s how many kids are in your kid or grandkid’s class to what that tax bill looks [like] at the end of every year,” Candland said.

Officials are looking into and discussing various solutions.

It’s important, Candland explained, for officials and citizens to consider the end goal.

“It’s time for the people of Prince William County to stand together and to understand — or to talk about — what we want our future to be,” Candland said.

Meeting attendees also had an opportunity to sign a petition that asks the Board of County Supervisors (BOCS) to create a plan and provide information about costs relating to the Rural Crescent.

The petition also requests the board adequate water for current residents.

“We ask the Board of [County] Supervisors to look at this before they vote on changes, so the community can understand what they are undertaking,” Ward said.