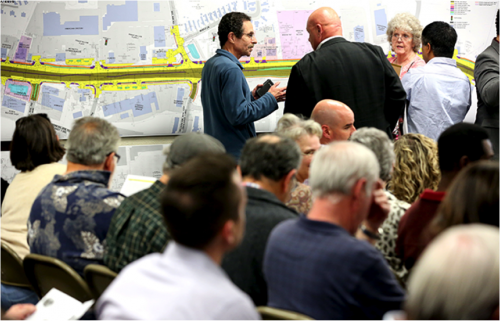 Residents and business owners met for a public hearing to discuss the Route 1 widening project from Featherstone Road to Mary’s Way.

The $100 million project, which is being managed by the Prince William County Department of Transportation, was initiated to help ease traffic congestion along the roadway.

The project is being completed using a combination of funds – including some federal funding – but the Northern Virginia Transportation Authority is providing most of the funding, said Prince William County Department of Transportation Richard Canizales.

This widening is part of a larger series of Route 1 widening efforts, which are being handled by the Virginia Department of Transportation.

The project on that 1.3 mile stretch will include widening the existing four lanes to six lanes, add a five-foot sidewalk on the east side of the road, and add a six to eight-foot asphalt trail on the opposite side of the road, according to Woodbridge Supervisor Frank Principi.

The road will have a posted 35-mile per hour speed, and increased pedestrian and bicycling facilities, according to county documents.

According to Principi, 74 properties will be impacted by the project, and there are 41 potential business relocations that will need to take place.

“This is a big, big project. And the job of the Prince William Department of Transportation and myself is to mitigate any impact on your property and on your business,” said Principi.

The county plans to finalize the design by January 2017, handle acquisition of the properties and right-of-way in 2017 and 2018, and begin construction on the project in 2019 with a slated completion in 2021, according to county documents.