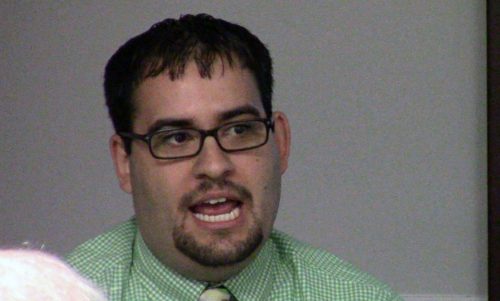 Program assists individuals who have disabilities

That’s what Elijah Boruchowitz, regional director of Kiddie Academy of Gainesville, spoke about at the Education and Innovation Committee Meeting on June 4.

The Prince William Chamber of Commerce held the meeting in Manassas.

One of three key speakers, Boruchowitz spoke about his program 21st Century Inclusion which intends to help individuals with disabilities who encounter difficulties finding jobs.

His presentation began with a story of a woman and a daughter in need.

Her daughter was on the autistic spectrum and had been recently let go from her volunteer position because of misconceptions around her disability.

Boruchowitz was moved by their story and wanted to help.

“So I sat down with her and we talked about how her daughter had wanted to become a teacher and it’s a goal that everyone has smashed for her, her entire life,” explained Boruchowitz.

He offered her an employment opportunity as a teacher’s assistant. He wanted to help her and provide the proper training to allow her to succeed in her field.

“Eight years later,” he continued, “I’m happy to say she just finished her child associates degree and is becoming a lead teacher.”

Boruchowitz used this anecdote to highlight an unfortunate reality in the perception of disabilities in society.

He seeks to reverse this and encourages businesses to hire these individuals, citing many benefits if they do.

One benefit Boruchowitz mentioned was that studies have found lower rates of absenteeism among employees with a disability.

This is backed up by a study that was done by DePaul University in 2007, “Exploring the Bottom Line: A Study of the Costs and Benefits of Workers with Disabilities.”

In this study it is also of note that when it came to job performance, there was little difference between employees with and without disabilities.

Along with hiring individuals with disabilities, Boruchowitz ended his presentation by stressing the importance of breaking down misconceptions about what these individuals can accomplish.