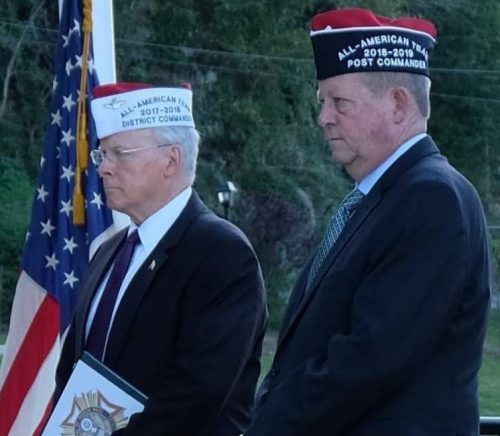 Prisoners of War, those Missing in Action honored

Prisoners of War and those who are Missing in Action were honored in Occoquan.

On Friday, a POW/MIA Recognition Day ceremony was hosted at River Mill Park, according to a release.

“We are assembled here to remember comrades who are being held as Prisoners of War or Missing in Action,” Veterans of Foreign Wars (VFW) Post 7916 Commander Jeff Lett told attendees. “We must not forget the sacrifices these comrades are still making and the suffering they are still enduring for us and our way of life.”

More than 82,000 from the United States have been named missing since World War II, according to VFW District 10 Commander and retired United States Air Force (USAF) Colonel Chuck Wilson.

“Let us remember those who put country before self, but didn’t return home from their wars,” Wilson said in his keynote address. “Let us remember their families, who continue to burn the candle of hope. And let us continue to tell the story that without the service and sacrifice of American servicemen and women, there would not be a United States of America.”

POW/MIA Recognition Day takes place each year on the third Friday in September.

Former Supervisor Mike May was among the attendees of the Occoquan event.

“It’s an honor to be here and observe this ceremony remembering those who were POW and those still Missing in Action,” May said. We must never forget.”