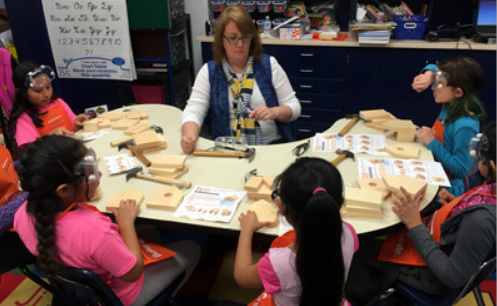 Princess Club teaches girls new skills, ways to give back

The princesses have arrived.

King Elementary School, located in Dale City, has been shaking things up with their Princess Club – an after school club for third, fourth, and fifth grade girls.

Donna Hessein, a teacher at the school, and founder of the Princess Club, decided to start it after the school’s principal began encouraging teachers and students to get more involved. After some thought Hessein decided she wanted a club that would help young girls.

“Well I thought since it’s King Elementary, Princess [Club] would be cute because the daughter of a king would be a princess,” Hessein said.

The club, which meets regularly throughout the school year, gives young girls the chance to learn about self-esteem, exercise, healthy eating, and take part in some fun and educational activities, according to Hessein.

“The idea was that there’s a princess inside of every little girl. Last year…we did a big formal high tea ceremony. And one of our first grade teachers actually brought in all of her china – I brought my grandmother’s china, we had finger sandwiches. And then we taught the girls how to set a proper place setting – it was wonderful, because many of these girls have never done anything like this,” said Hessein.

The Princess Club has been very active in the community. According to Hessein, the girls are taking part in the ‘Adopt a Highway’ program, and cleaning up the roadway in front of the school.

Most recently, the Princess Club partnered with Home Depot, to learn how to make bird houses.

“This year we wanted to make sure we were doing a lot more educational and hands-on [activities],” said Hessein.

Hessein said that the bird house activity was not only a lot of fun for the girls, but it also connected to some of the concepts covered in the third grade SOLs.

“It was a great way to teach third grade SOL objectives for simple machines using screws, inclined planes, and levers. The girls used hammers, nails, screwdrivers, and forms of measurement. This was the first time that many of our young Princesses had ever held and manipulated a hammer, yet it was a ‘smashing success.’ Thankfully, no thumbs were injured in the production of this project,” stated Hessein.

Even some of the dads got in on the building action, according to Hessein.

“Some of the dads came [for pickup] a little early, and were helping the girls out…they were just so excited,” said Hessein.

Hessein recalled how at the end of the activity, some of the girls expressed excitement about starting a birdhouse building business of their own.