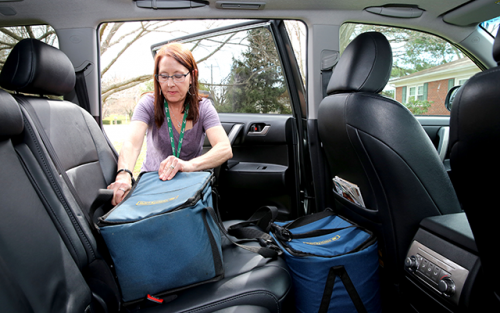 The numbers are in.

According to a Prince William County Government release, in 2015 the volunteers for the Prince William Area Agency on Aging’s Meals-on-Wheels program delivered 35,466 meals to 278 elderly residents that are homebound.

87 volunteers took part in the effort, spending a total of 5,356 hours delivering the meals to elderly residents, while checking in on them and giving them some time for social interaction, according to a release.

One volunteer, Mary Carolla, started as a volunteer in her children’s schools but when they went off to college, she wanted to find another way to give back, which is when she found the Meals-on-Wheels program, according to a release.

“I feel like I help them, and they help me. It makes you feel so good to be appreciated,” stated Carolla in a release.

A 98 year old Manassas resident named Hazel said that Carolla’s meal deliveries were crucial in making sure she had something to eat, stated a release.

“I live alone. I have no way to go to the store unless I get someone to take me,” Hazel said in a release.

Over the past several weeks, members of the Prince William County Board of Supervisors have done ride-alongs with the program volunteers, to bring awareness and see the work that they’re doing, according to a release.

“Meals-on-Wheels is a really easy way for citizens to help others in their community where a little bit of work goes a really long way. You can volunteer one day a week or every day of the week for just a couple of hours, and you make a huge impact on lives of literally every person you touch as you travel along the route. It’s a great opportunity to make our community a better place,” stated Supervisor Marty Nohe in a release.

People interested in volunteering can call Melodee Sheehan at 703-792-4583 or email Sheehan at msheehan@pwcgov.org.