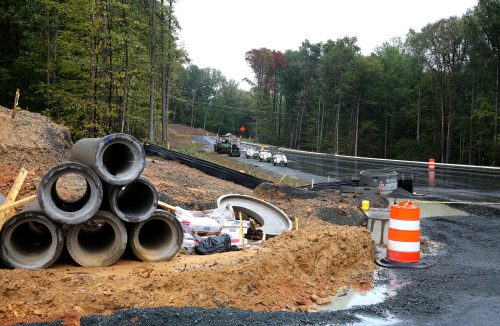 Get the latest on Prince William transportation projects

Wondering about what’s going on with transportation construction projects in Prince William? Then we’ve got you covered.

According to a release, the Virginia Department of Transportation (VDOT) provided an update on all of the road projects currently underway in the county.

Burwell Road: The Burwell Drive/Fitzwater Drive improvements were completed in July. The paving of the gravel section of Burwell Road to the Fauquier County line is scheduled to be completed in late summer of 2017.

Vint Hill Road Realignment: Rock blasting and drilling on the Vint Hill road realignment is complete. The final realignment will be completed in October.

Minnieville Road: All rights-of-way have been obtained for the widening of Minnieville Road between Spriggs Road and Va. 234. Utility relocation has started, and construction is scheduled to begin in October with a completion date set for November 2018.

Purcell Road: The temporary road alignment for the Purcell Road widening project was completed in August. Filling the road with dirt to reach the proper elevation before paving is in progress. All utility relocation is complete. The construction is scheduled to be completed in October.

Antietam Road Sidewalk – The acquisition of environmental permits is expected in late September. Construction is scheduled to begin in the spring of 2017 and is expected to take six months to complete.

Old Bridge Sidewalk – Design completion is scheduled for the spring of 2017. The advertisement for the project should go out in the summer of 2017.

Dumfries Road Shared Use Path – Ongoing work to complete the project on Dumfries Road from the First Mount Zion Baptist Church to 4100 Talon Drive includes geotechnical boring and subsurface utility marking. Design completion is expected in February 2017 with construction set to begin in May 2017.

Blackburn Sidewalk – Bids were open on Sept. 7 to build the sidewalk between Rippon Boulevard to Cow Branch Bridge. A contract was awarded and construction is scheduled to begin in October.

Powell’s Creek Pedestrian Footbridge – A threat to the Northern Long-Eared Bat could delay the construction start date for the footbridge along U.S. 1 in Woodbridge, but construction is still scheduled to begin in late fall 2017 and be completed in July 2017.

Visit the county’s transportation website for more information on projects and studies.

Virginia Department of Transportation projects include:

I-66: The Interstate 66 widening to Haymarket between U.S. 29 and U.S. 15 was completed in August. The project included the addition of one high-occupancy lane and one general lane in each direction. The road and bridge construction for the U.S. 15/I-66 Interchange project is underway. U.S. 15 traffic has been shifted onto new bridge. Construction is scheduled for completion late summer 2017.

Aden Road Bridge: The bridge was originally supposed to be repaired and returned to its original position, but it was in need of unexpected repairs and had to be removed. Discussions are underway between the county, the community and several federal agencies about how to proceed.

Route 1 in Dumfries: Design for widening U.S. 1 in the Town of Dumfries between and Va. 234 from two to six lanes is underway.

Route 234 Pedestrian Improvements: Funding for pedestrian improvements on Va. 234 between Four Seasons and Fortuna Center Plaza has been identified. The project team of designers and utility experts are looking for possible conflicts in utility location and rights-of-way acquisitions.