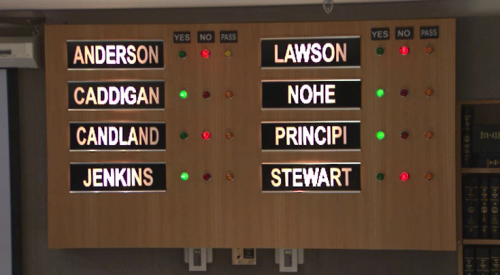 Things got interesting last night in the Board Chambers, as the Prince William County Board of Supervisors had a standoff over the advertised tax rate, which led to a recess with no rate set.

Each year, the board of supervisors are required to advertise a property tax rate by a specified date.

While the board can ultimately decide to adopt a lower tax rate in their final budget draft, the advertised tax rate acts as a ceiling, and the adopted rate cannot go higher than that ceiling.

According to county documents, the five year plan that the county adopted as a ‘roadmap’ for Prince William’s capital improvements and budget planning called for a 3.88% tax increase for this coming fiscal year.

On an average tax bill that would lead to a $145 increase, and the proposed rate per $100 of assessed property value would increase from $1.122 to $1.145, according to county documents.

In the initial vote for the advertised tax rate, Supervisors Caddigan, Jenkins, Nohe and Principi voted in favor, and Supervisors Anderson, Candland, Lawson, and Stewart voted against.

According to Supervisor Pete Candland, he refused to support the 3.88% on the basis that the economy was underperforming, and that the county had an issue with excessive spending.

For Supervisor Maureen Caddigan, her support for the 3.88% stemmed from her commitment to sticking to the five year plan.

“We have a five year plan, we need to keep our promises,” said Caddigan.

Supervisor Frank Principi also advocated for the rate, stating that it would, based on the average increase of $145 per year, only cost homeowners an additional $12 per month.

“I’m happy to pay it, because I think the windfall back to every citizen in this county is exponentially higher than the $12,” said Principi.

Following a heated exchange between Candland and Principi, Candland proposed advertising a flat tax rate of 1.103% – significantly lower than the five year plan’s 3.88%. Candland did not offer details on what would need to be cut from the proposed budget, as asked by Principi, to support his rationale for the flat tax rate.

The motion was also defeated 4:4.

The Acting County Executive Christopher Martino stated prior to the initial 4:4 vote that the county needed to have the agreed upon advertised tax rate figure by March 4, in order to advertise the rate for public hearings on the budget.

“The rate needs to be advertised by March 13, in order for us to have our public hearing as tentatively planned… we’ve got a tight schedule here, to meet the budget calendar,” said Martino.

Following the repeated stalemate of 4:4 votes on the various motions proposed, Martino stated that if the county shifted the budget schedule, the process could be extended out all the way until May.

The board ultimately voted to recess the meeting, with no rate set.

While the board members checked their calendars to find an alternative date, Stewart jokingly said, “Hopefully someone won’t make it – so we’ll have an odd number,” while negotiating on several dates.

A special meeting has been set for March 4 at 7 p.m., which will be solely to set the advertised tax rate.