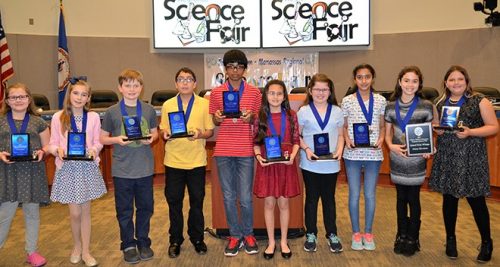 According to a release, Ronald Reagan Middle School student Naomi Heilin won the fair’s Junior Division Grand Prize trophy for her project, which “looked into the effect of the mechanical arrow release and how it penetrates a target.”

More on Heilen’s project, from a release:

Heilen’s project tested her hypothesis that the use of mechanical release devices in archery target shooting would result in the arrow going further into a target than if a person shot the arrow from the bow. Her hypothesis is based on the arrow having more side-to-side motion due to pulling the bowstring with a finger, which affects how straight the arrow will fly and how deep it will penetrate the target – also known as the “archer’s paradox.”

Here’s a list of other Prince William student first place winners, from a release: